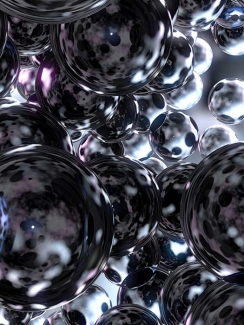 The Cornell and Jin groups have just met the challenge of creating and studying an extremely strongly interacting Bose-Einstein condensate (BEC). This feat was reported in Nature Physics online January 12, 2014. An example of an ordinary weakly interacting Bose-Einstein condensate (BEC) is a quantum gas of rubidium atoms (85Rb) all piled up in a little ball whose temperature is a chilly 10 nK. Normally, the interactions between these atoms are weak, and the atoms behave as if they were much smaller than the average distance between nearby atoms, which is typical of a gas. The atoms don’t collide or otherwise interact with each other very often.

For some time now, physicists have wanted to liven things up in a BEC and investigate what would happen if the 85Rb atoms had stronger interactions. Strongly interacting means the atoms act as if they were puffed up in size until they rub up against and slide by one another, just like molecules in liquid water do. In other words, strong interactions would change a quantum gas of 85Rb atoms into a quantum liquid. And, quantum liquids with controllable interactions are a new, fascinating field of study for JILA’s atomic physicists.

Until now, however, there had been a major problem with making the atoms effectively puff up and become strongly interacting. Once atoms in the BEC start interacting strongly, they like to form molecules and disappear from the experiment. This disappearing act has made it a challenge to study the behavior of strongly interacting “puffed-up” 85Rb atoms.

The rapid part was critical. The researchers were able to make the atoms swell up so fast that there was ample time to study their behavior and atom-atom interactions. Before the atoms formed molecules and disappeared, the researchers were even able to measure and track changes in the velocities of the giant puffy atoms.

The team is already at work figuring out new ways to probe a strongly interacting BEC, including a search for the contact, a property of ultracold ensembles of atoms. The contact was identified by the Cornell-Jin collaboration in a BEC in 2012. – Julie Phillips