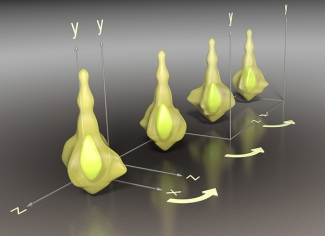 The Cundiff group’s new 3D Fourier-transform spectroscopy technique (modeled as 3D movie glasses) allows researchers to peer inside the quantum world and identify quantum pathways between different states. The pathways are determined from measurements of the real experimental spectra reflected in the lenses.

The Cundiff group has taken an important step forward in the study of the quantum world. It has come up with an experimental technique to measure key parameters needed to solve the Schrödinger equation.

The amazing Schrödinger equation describes the time-dependent evolution of quantum states in a physical system such as the group’s hot gas of potassium atoms (K). But, for the equation to work, someone has to figure out a key part of the equation known as the Hamiltonian. Unfortunately, Hamiltonians are really complicated for most real-life systems because they characterize a multitude of quantum states and pathways that exist inside a roiling quantum world.

For experiments involving many atoms or other particles that interact with each other and their environment, the only hope of ever figuring out the correct Hamiltonian may be to do it experimentally. And, the Cundiff group has just taken a giant step toward the goal of doing exactly that.

In a new Nature Communications paper, research associate Hebin Li, former research associates Alan Bristow and Mark Siemens, graduate student Galan Moody, and Fellow Steve Cundiff report on their nifty new technique known as optical three-dimensional (3D) Fourier-transform spectroscopy. They used the technique to produce detailed spectra of a gas of hot (180 ºC) K atoms. The spectra allowed them to see exactly what was happening inside the quantum world of the atoms in their experiment.

Specifically, the researchers were able to disentangle all possible pathways between specific initial conditions of the K atoms (typically ground states) and final conditions (such as excited states or quantum mechanical superposition states). And, once they had identified all possible pathways, the researchers were able to make measurements necessary for characterizing the pathways. With this information, they were able to figure out some pieces of the Hamiltonian they needed.

Li and his colleagues are excited about the many possibilities of their new technique, including the dream of coherently controlling chemical reactions. Coherent control requires an understanding of all possible quantum pathways in a particular reaction. The fact that 3D Fourier-transform spectroscopy made it possible to identify all these pathways is a huge step forward in realizing this dream.

The new technique is also a huge step towards being able to experimentally determine a Hamiltonian for an even more complex system.