Nanomeasurement is a Matter of the Utmost Precision 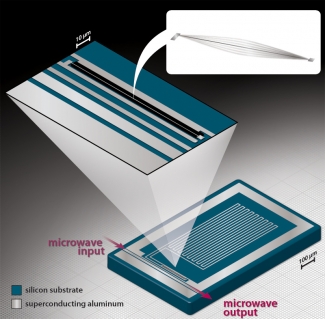 False-color microscope images showing a freely suspended nanowire embedded in a resonant microwave cavity. The wire and cavity are made from superconducting aluminum. This arrangement enables ultraprecise measurements of nanomechanical motion at cryogenic temperatures.

Not content with stepping on their bathroom scales each morning to watch the arrow spin round to find their weights, former research associate John Teufel and Fellow Konrad Lehnert decided to build a nifty system that could measure more diminutive forces of half an attoNewton (0.5 x 10-18 N). Their new system consists of a tiny oscillating mechanical wire embedded in a microwave cavity with an integrated microwave interferometer, two amplifiers (one of them virtually noiseless), and a signal detector. The system is so sensitive that at milliKelvin temperatures, it could weigh a cube of carbon atoms with 140 atoms on a side, or ~2.5 x 106 atoms. (According to Italian physicist Amedeo Avogadro (1776–1856), this cube should weigh about 5 x 10-17 grams.)

Of course, Teufel and Lehnert haven’t actually weighed any atom cubes yet. What they have done is measure the nanomechanical motion of a thin aluminum wire inside the microwave cavity with precision beyond that at the standard quantum limit, which is a limit on the minimum noise at quantum scales. Imprecision is one of two fundamental sources of noise, whose sum must exceed that standard limit.

Research associate Tobias Donner, graduate students Manuel Castellanos-Beltran and Jennifer Harlow, and new JILA Associate Fellow Cindy Regal provided valuable assistance in the creation of the new force detector. Regal and Teufel figured out how to tuck the nanomechanical wire inside the tiny resonant microwave cavity made of superconducting aluminum. Castellanos-Beltran worked with colleagues at NIST to design the tunable noiseless amplifier, a device that uses superfast switches sandwiched between layers of superconducting material. Teufel then put all the pieces together to make a measurement of nanomechanical motion that improved the group’s previous displacement imprecision by a factor of more than 28.

The Lehnert group’s new measurement system has opened the door to new experiments to probe the quantum nature of very small objects. The next step will be to use techniques analogous to laser cooling to cool the nanomechanical motion to its ground state. After that, the sky’s the limit: future experiments may one day include the creation of entanglement between mechanical motion and other quantum systems — or even tests of quantum theory itself.   - Julie Phillips