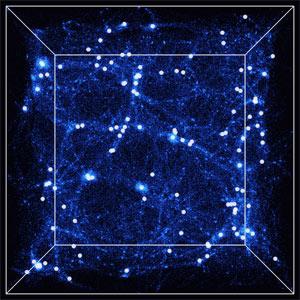 A new model looks at both the distribution of galaxies and of dark matter in the Universe. The researchers discovered that their new model made it much easier to compare observations with theoretical predictions.

Understanding dark matter's role in the distribution of galaxies in the Universe is a central question in cosmology. Dark matter pervades the universe. Haloes of dark matter surround galaxies and galaxy clusters. Dark matter also forms filamentary structures that connect these haloes, forming a cosmic web, as illustrated on the right. Until recently, cosmologists tried to understand the distribution of galaxies with theoretical analyses using different-sized dark matter haloes containing zero, one, or more galaxies. However, this approach required empirically based manipulations to accurately describe observations made by ground- and space-based observatories.

Mark Neyrinck, Fellow Andrew Hamilton, and CU Associate Professor Nickolay Gnedin decided to take a different approach: Instead of modeling multiple galaxies attached to one large halo, they defined galaxies (each with its own attached halo) as the fundamental objects for study. In the process they eliminated many assumptions and theoretical constraints, making it possible for the new galaxy-halo model to give observations a much larger role in their calculations.

Mark Neyrinck was awarded his Ph.D. from CU in Astrophysical and Planetary Sciences in August and left JILA in September to begin a postdoctoral position at the University of Hawaii. The findings reported here formed the basis of his thesis. They were published online by the Monthly Notices of the Royal Astronomical Society on July 28 (2005) and appeared in print in September.   - Julie Phillips