The Hunt Is On For The Axion 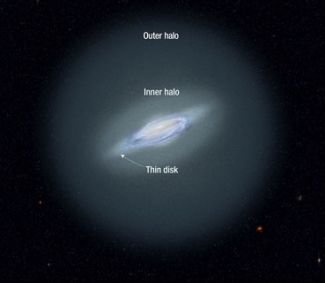 Illustration of the structure of the Milky Way halo that consists mostly of dark matter. Axions are a hypothetical constituent of this dark matter.

The first results are in from a new search for the axion, a hypothetical particle that may constitute dark matter. Researchers in the Haloscope At Yale Sensitive to Axion Cold Dark Matter (HAYSTAC) recently looked for evidence of the axion, but so far they have found none in the small 100 MHz frequency range between 5.7 and 5.8 GHz.

The experiment relied on the Lehnert group’s microwave circuits, which performed as well as the laws of quantum mechanics allow. The group’s circuits are among the most sensitive devices ever made.

“Did we find an axion?” Lehnert said. “ No, but we found where it isn’t.” However, there are other many other frequencies where axions could still be detected.

The axion is a hypothetical particle that could make up “dark matter.” Dark matter constitutes more than 80% of the mass in the Universe, including the halo surrounding our Milky Way Galaxy. No one knows for sure what dark matter is made of, but if dark matter is made up of axions, the Lehnert group and its collaborators at Yale University, the University of California, Berkeley, and Lawrence Livermore National Laboratory have a method for detecting them in the laboratory. To do so, however, requires that the researchers look in the exact microwave frequency range determined by the mass of the axion particles, which could exist in a wide range of ultrasmall masses. 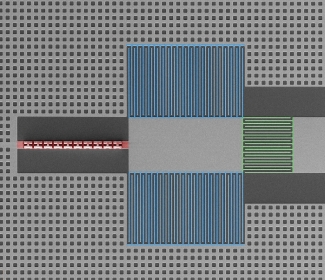 Scanning-electron microscope image of the circuit used in searches for axions, a hypothesized form of dark matter. The superconducting Josephson junctions (shown in red) were developed by the Lehnert group in JILA. They are what make the dark-matter detector sensitive enough to identify microwave photons produced by axions affected by the experiment’s strong magnetic field.

If axions exist, they are detectable because they can convert into microwave photons in the presence of intense magnetic fields. And, if axions happen to be inside a microwave cavity that resonates with the mass of the dark-matter axions and the cavity is inside an incredibly cold refrigerator, the axion-to-photon conversion may happen often enough for researchers to detect the microwave photons in the lab. This is what the HAYSTAC collaboration was looking for in their first results.

Lehnert’s group specializes in making devices that control and measure electricity as well as the laws of quantum mechanics allow. It invented tiny electric circuits that include superconducting Josephson junctions, which made the detector in the HAYSTAC experiment sufficiently sensitive to detect any axions that appeared in a single 100 mHz section of the device’s full range of 4–8 GHz.

“For reasons unrelated to searching axions, my NIST colleagues and I had constructed devices that measure microwave frequency signals in the range of 4–8 GHz,” Lehnert said. “We were interested in how close a measurement could come to the limit imposed by quantum mechanics. Coincidentally, these devices had just the right properties to be used in the HAYSTAC that was being constructed at Yale.

“Our role was to build the devices that would perform the delicate measurement of electrical currents at the quantum limit.” Lehnert is optimistic about future searches since there are still lots of frequencies to search.