How a Dust Bunny Becomes a Planet 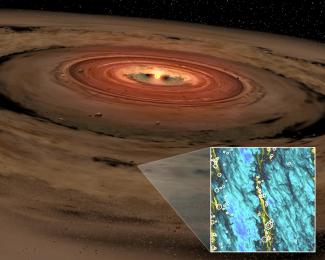 Cosmic dust surrounds a new star. Within the cosmic dust are small pebbles that create turbulence. This turbulence allows the dust to accrete and form planetesimals.

Jupiter is large enough to fit 1,300 Earths inside, and still have room. But like all planets, Jupiter was once nothing more than a cosmic dust bunny.

A team of physicists at JILA and the University of Arizona, led by JILA Senior Research Associate Jake Simon, are studying how cosmic pebbles­­—­starting only a millimeter in size—can lead to the formation of planetesimals, the football-field-to-Delaware-sized primordial asteroids whose development defined our solar system’s architecture.

There are many possible sources of initial turbulence. One source, known as streaming instability, is the presence of small pebbles within the cosmic dust. ­­

“So what’s going on here is the small solids, which you might think of as the pebbles within the disk, those feel aerodynamic forces, sort-of headwind forces, against the gas. And it turns out in some circumstances that doesn’t just cause them to spiral towards the star... it also causes them to cluster,” says JILA Fellow Philip Armitage.

“But what is not so clear is how you make them so clustered that they actually collapse gravitationally, and that’s really the point of these simulations.”

Understanding the formation of these early planetesimals may reveal the architectural rationale of our solar system. Is it a coincidence that our solar system’s gas giants, Jupiter and Saturn, are fenced away from our moderately sized terrestrial planets by an asteroid belt?

In terms of forming a giant planet, Armitage says the tinier the starting materials, the better. “If the planetesimals are small, then they themselves are damped aerodynamically by the gas disc, and so then they actually accrete faster onto the core of a forming giant planet.”

The accretion of planets is not unlike the accretion of a snowball. Rolling a small snowball among the tiny snowflakes on the ground quickly generates a giant snowball. Trying to combine several snowballs, however, results in a scattered mess.

“Large objects will tend to be scattered by the growing core more,” explains Armitage, and so they are not as readily accreted.

And much like snowflakes, which precipitate in different sizes, planetesimals have a wide variation of initial sizes. To quantify this variation, scientists use the mass function. The mass function describes many properties of the planetesimals, such as the average size, and the ratio of small to large particles.