How Cold Can a Tiny Drum Get? 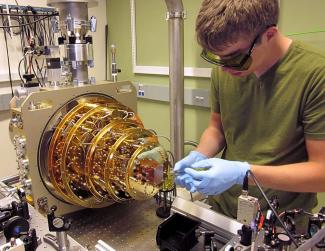 To investigate how cold a tiny drum could get if it were laser cooled down to a limit set by the laws of quantum mechanics, graduate student Bob Peterson (shown here) and his colleagues in the Lehnert-Regal lab used this brand new refrigerator featuring gold plating on copper plates. The device can cool down to as low as 30 mK. Laser cooling then further cools a tiny drum to 14 µK, more than 2,000 times colder.

Bob Peterson and his colleagues in the Lehnert-Regal lab recently set out to try something that had never been done before: use laser cooling to systematically reduce the temperature of a tiny drum made of silicon nitride as low as allowed by the laws of quantum mechanics. Although laser cooling has become commonplace for atoms, researchers have only recently used lasers to cool tiny silicon nitride drums, stretched over a silicon frame, to their quantum ground state. Peterson and his team decided to see just how cold their drum could get via laser cooling.

The lowest drum temperature achieved in the experiment was 14 µK, i.e., 14 millionths of a degree above absolute zero, or  –434.47 ºF. Without changing the quantum nature of the laser light, there was no way to get the temperature any lower, either.  At that temperature, the fundamental quantum fuzziness of the laser heats up the drum just as fast as the laser can cool it. In other words, at 14 µK, the researchers had reached the brick wall known as the quantum backaction limit, which is the formal way of saying quantum mechanics stops additional laser cooling in its tracks.  The researchers responsible for this exciting result include graduate student Peterson, former research associate Tom Purdy, research associate Nir Kampel, former graduate students Reed Andrews and Pen-Li Yu as well as Fellows Konrad Lehnert and Cindy Regal.

This successful experiment is an important step in the Lehnert-Regal collaboration’s goal to use tiny drums to connect the microwave frequencies of electrical circuits with optical frequencies. Reaching this goal may lead to the creation of vast networks of quantum computers linked via fiber-optic cables. Quantum computers will be able to process information much faster than today’s fastest computers.

“The new refrigerator is exactly the same as other dilution refrigerators in the sense that it has a plate you can screw stuff onto so it gets cold,” Peterson said.  “But it’s very different in that it sits on an optical table, and it’s tipped sideways relative to the typical (vertical) configuration to make it easier to get the optics in.” Peterson noted that he is the person in the picture screwing the optical cavity onto the refrigerator.

Another big plus is that the new refrigerator cools down to as low as 30 mK. And, the Regal group’s optical cavities have never before been cooled below 4 K. The many technological advances coming out of the Lehnert-Regal lab are bringing researchers closer to the goal of using a silicon nitride drum to store and transfer information inside a microwave–to–optical converter.––Julie Phillips