Hitchhiker’s Guide into the Galaxy 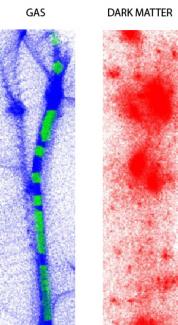 (Left) Superhighways consisting of filaments (blue) and with regions of uniform temperatures (green) route enough gas into nascent galaxies to make it possible for the galaxies to form stars. The blue filament shown here is about 720,000 light years long and runs through just a few major galaxies. (Right) Patterns of dark matter close to the same galaxies show no relationship to the transport of gas. Credit: A. Gayler Harford, JILA

Long, long ago galaxies now far away formed around ravenous black holes scattered throughout the Universe. Some 12.5 billion years later, JILA scientist Gayler Harford and Fellow Andrew Hamilton have identified the superhighways that funneled gas into some of the nascent galaxies. These thruways not only routed gas to feed the monster black holes, but also supplied raw materials for the billions and billions of stars that have illuminated those galaxies ever since.

The cosmic gas-transporting superhighways were filaments of ordinary matter that extended outwards from primordial galaxies and often linked entire strings of galaxies, according to simulations performed by Nick Gnedin of Fermilab and analyzed by Harford. Under favorable conditions in the simulation, the filaments formed long cylinders of gas at uniform temperatures, typically 10,000 to 20,000 K. The simulations suggest that the properties of the gas entrained in the filaments are far more important in determining filament structure than any nearby dark matter.

Haloes of dark matter surround most galaxies. Scientists have long thought dark matter’s role to be so critical to galaxy formation that the structure and behavior of nearby gas clouds could be ignored in models of galaxy formation. However, Harford’s results suggest that the gas hitchhiking along the filaments into the core of galaxies may be more important than dark matter in determining whether an emerging galaxy can pull in enough gas to form stars.

Many of the galaxies analyzed by Harford do not have intergalactic filaments attached to them. Such galaxies may be unable to accumulate enough gas to form stars. Harford says that there may be a new class of galaxies in the Universe that have not been detected because they are not luminous.

There may even be some of these dark galaxies near our own Milky Way. The standard model of cosmology predicts many more satellite galaxy haloes around the Milky Way than the galaxies we see. According to Harford, the galaxies may well be there. We just can’t see them.