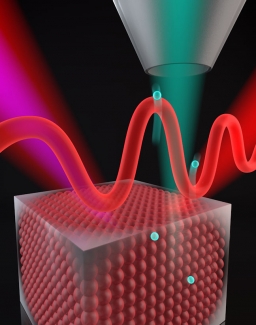 High harmonics of a femtosecond laser kick electrons out of a nickel crystal lattice, and the electrons then move towards the surface. The interaction of the electrons with an infrared laser probe allows researchers to determine how long electrons linger in excited energy levels before they escape the crystal.

The Kapteyn/Murnane group has measured how long it takes an electron born into an excited state inside a piece of nickel to escape from its birthplace. The electron’s escape is related to the structure of the metal. The escape is the fastest material process that has been measured before in the laboratory––on a time scale of a few hundred attoseconds, or 10-18 s. This groundbreaking experiment was reported online in Scienceon June 2, 2016. Also in Science on July 1, 2016, Uwe Bovensiepen and Manuel Ligges offered important insights into the unusual significance of this work.

To document the electron’s great escape from nickel, the group used a high-harmonic generation-based measurement scheme that promises to open the door to measurements of many processes that occur inside atoms, molecules, liquids, and solids. These processes occur too fast to be measured with ordinary techniques in the laboratory.

To make the electron-escape measurement, the researchers aimed a sequence of high harmonics of femtosecond laser light at a sample of nickel. The different colors (i.e., photon energies) of the harmonics kicked electrons out from different energy levels in the crystal structure of the nickel, sending them towards the surface. Some electrons escape almost instantaneously. But other electrons­­––if their energy coincides with a high-energy nickel state­­––are temporarily grabbed by the high-energy state and linger there for a few hundred attoseconds.

The challenge was how to measure this linger time, or lifetime. Here the researchers took advantage of the weirdness of quantum mechanics. The researchers shined a laser beam onto the sample at the same time as the high harmonics, making it possible for the electrons to absorb different numbers of harmonics and laser photons and still end up in the same final state. This process gave rise to interferences between the different quantum paths taken by the electrons. The researchers analyzed how these quantum interferences changed as the time delay between the laser and high harmonic pulses was changed. The analysis showed that it was possible to determine exactly how long the high-energy nickel band temporarily grabbed onto some electrons before they finally were able to escape for good!

The researchers responsible for uncovering this great escape include research associate Zhensheng Tao, graduate student Cong Chen, Fellows Henry Kapteyn and Margaret Murnane, and colleagues from NIST and the University of Wisconsin-Madison.