The Gap in Quantum Understanding: How to Accurately Communicate Quantum Ideas 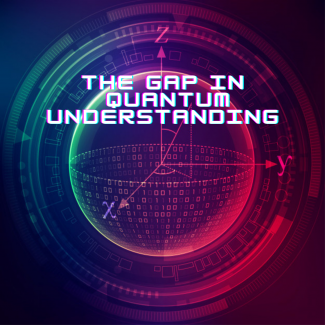 The Bloch sphere, shown here, is a representation of a qubit, the fundamental part of a quantum computer.

The word “quantum” can be mysterious and unfamiliar to the general public. Most of the public’s exposure to quantum technology has been Hollywoodized and framed as a “catch-all” for hard-to-define scientific processes. From attempting to explain time travel within TV show Quantum Leap, to the quantum realm of Marvel’s Avengers series, the word “quantum” is used to fill in the explanation gaps. As the majority of viewers accept “quantum” as this catch-all, it creates a disconnection between the word’s true definition and an understanding of the scientific processes behind it. Asking any non-physicist if they know what “quantum entanglement” is, or if they can define “quantum superposition” will quickly reveal this lack of understanding. This misunderstanding causes problems, as quantum technology is quickly being developed and commercialized. With the predicted “boom” in quantum technology predicted by experts, it is important to realize the repercussions of this misunderstanding. Particularly, writers, scientists, and citizens need to be aware of how to communicate and invoke to the public, an appreciation of the true science of quantum physics.

The Origins of Misunderstanding:

The misunderstanding of the science of quantum physics not only stems from misinformation peddled by Hollywood, but also from a lack of accurate writings about the field and its’ technology. Any skilled science writer will tell you that writing about quantum technology in an accurate and accessible way, within a word-limit, is extremely difficult. Explaining the processes of superposition or quantum tunneling requires an in-depth, lengthy description. To aid in giving a human touch to quantum based articles, many writers interview key scientists. Even then, the publication of quantum articles can seem dry or boring compared to the glamorized, CGI-designed, inaccurate “quantum” scenes of movies and TV shows (Mount, Baer, & Lupoli 2021)

A further cause for the misunderstanding of quantum physics originates from the weird and unorthodox processes within the quantum world (Greene & Rogan 2021). Studying the quantum world is not intuitive, and many researchers have difficulty communicating the weirdness of quantum physics because it’s not relatable to everyday experiences. For example, the quantum phenomenon of superposition, where a particle can be in two places at once, is difficult to relate to something that typically happens in an individual’s day-to-day proceedings.

Another reason for the general misunderstanding is the lack of actual education of quantum physics in the majority of the public. Only a minority of people, specifically those getting higher education degrees, are exposed to quantum physics, leaving the remaining majority unsure of actual quantum physics processes and the current ongoing research.

Quantum technology hype is a symptom resulting from this misunderstanding of quantum physics. This hype is defined as the expectations of the general public about technology. Consequently, most of the public doesn’t have a clear grasp of what innovative new quantum technologies are capable of. According to Co-Founder and Chief Technology Officer of ColdQuanta (a company specializing in quantum technology) and JILA Fellow, Dr. Dana Anderson: “…especially of quantum computing, there was a lot of hype. There was also a lot of misunderstanding on the side of the buyers into the whole idea of what quantum can bring.”

Quantum hype rose significantly when Google announced its partnership with NASA and Oak Ridge National Laboratory to achieve “quantum supremacy” in 2019. According to a 2020 study, quantum computing is on the upward trend of the Gartner Hype Chart (a model to describe the collective expectations of developing technology by the public). As quantum technology continues to advance, the visibility and expectations of this technology by the public increases (Smith, 2020). While the increase in interest is beneficial for companies investing in quantum technology, this interest can also be extremely detrimental to accurately communicating these quantum processes. The Quantum Daily science writer and Penn State professor Matt Swayne has found this to be a problem in his own work. “My issue is how do I write something that is enthusiastic and something that is interesting but is not hype. So, the real struggle for us going forward is balancing enthusiasm, interest, and hype.”

So How Can You Communicate Quantum Accurately?

There isn’t one right way to accurately communicate about the science of quantum physics. According to Swayne: “I always like to contextualize the information to someone’s life. Unless you’ve personally been quantumly entangled, I wouldn’t know how to describe that. Some of the analogies are fitting, such as superposition. I’ve tried to explain superposition as, instead of a light going on and off, it’s more of a dimmer, where you can tweak the light.” Many science writers and scientists have found success in using analogies to explain these difficult processes. In my work as the Science Communicator at JILA, I’ve worked on quantum research articles with scientists who have suggested analogies such as quantum gas pancakes, electric field knobs, or even describing entanglement as tying a knot with a string. However, these analogies can also be troublesome as they can dilute the accuracy of the science. Swayne’s light analogy is helpful, “but of course there are people who will say that’s not correct.” This makes the communication of quantum science even more tricky.

Because quantum processes are extremely difficult to visualize; the processes become distant and foreign. Analogies help to make the quantum processes easier to visualize and understand. A study by Mount et al. in 2021 from the Strategic Management Journal found that the more distant a novel technological idea is from the individual, the more likely this novel idea will be perceived negatively. This becomes important for communicators of quantum physics, especially those marketing or investing in the technology. Making this mysterious and unfamiliar world more approachable for the audience adds stronger connections and contextual clues that aid understanding. When the reader becomes part of the science it makes the communication more impactful and memorable to the audience. To make quantum physics and quantum technology more understandable to a public audience, communicators must contextualize the science in the audiences’ life. The science will become more relatable and understandable while maintaining scientific accuracy. With the future commercialization of quantum technology, it’s important that science communication catches up to accurately portray the advances in this field.

The word “quantum” can be mysterious and unfamiliar to the general public. Most of the public’s exposure to quantum technology has been Hollywoodized and framed as a “catch-all” for hard-to-define scientific processes. This misunderstanding causes problems, as quantum technology is quickly being developed and commercialized. With the  “boom” in quantum technology predicted by experts, it is important to realize the repercussions of this misunderstanding. Particularly, writers, scientists, and citizens need to be aware of how to communicate and invoke to the public, an appreciation of the true science of quantum physics.