The Forces involved in Folding Proteins 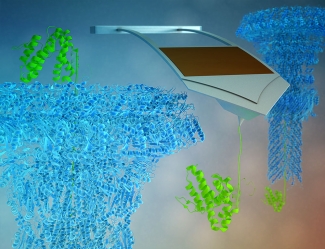 Model of the type three secretion system in Salmonella Bacteria

Washing your hands after cracking an egg or touching raw chicken may seem common sense, as the possible resulting bacterial infections have been thoroughly studied. Yet, researchers at JILA have found something surprising and ground-breaking about the physics of bacterial infections. In a new paper, JILA physicist Thomas Perkins collaborated with CU Biochemistry Prof. Marcello Sousa to dissect the mechanisms of how certain bacteria become more virulent. The research brings together the Perkins lab expertise in single-molecule studies and the Sousa lab expertise in the type III secretion system, a key component of Salmonella bacteria.

The type III secretion system is shaped like a syringe, with a needle that’s only two nanometers in diameter (for reference an atom is around 0.1 to 0.5 nanometers in diameter). Through these needle-like structures, bacteria pump effector proteins directly into host cells, such as humans or livestock for example, to take control of various host cell functions, including suppressing the cell’s immune system or hijacking its DNA and RNA machinery. In order for effector proteins to pass into the host cell, the proteins must be partially unfolded as the 2-nm pore is only a few atoms wide. Proteins that don’t unfold clog the needle leading to the prevailing model that effector proteins have low thermodynamic stability and so are often unfolded while proteins that clog the needle have high stability.

Protein folding has been studied for decades. In general, proteins fold into their most stable state. Historically, protein stability is measured using thermodynamics. According to JILA Fellow and Adjoint professor in Cellular, Molecular and Developmental Biology, Thomas Perkins, “The classic way biochemists measure protein stability is either to increase temperature or a denaturant, like urea, to a high level and then lower it back down. If a protein unfolds and refolds under these conditions, then you can measure the thermodynamic stability of the protein.” When applying this technique to effector proteins, the team found effector proteins have typical thermodynamic stabilities. Indeed, thermodynamic stabilities are indistinguishable from proteins that clog the needle. The team then looked to see if mechanical force might play a role.

The Perkins lab has had lots of experience unfolding proteins using atomic force microscopy (AFM). They developed modified cantilevers that have improved force precision and stability. Nonetheless, it still took four years of effort to develop the ability to reliably apply force to the two model effector proteins (SptP and SopE2), larger and more complicated proteins than the model proteins the Perkins lab has studied in the past. The team needed to anchor the protein down to a surface—without it randomly sticking—and then pull on it from a specific point. After this development, they were finally able to look at the mechanics of effector protein unfolding.

Their data showed that the two model effector proteins were mechanically labile, meaning that they would easily unfold at low forces. Perkins said: “what is remarkable is that these proteins unfold at very low forces compared to a peer set of other proteins. That led us to the hypothesis that it is the mechanical unfolding of these proteins that governs whether a protein can actually make it through the type III secretion system.” Prior work by others showed that proteins known to clog the needle unfold at high force. Perkins went on to say “If our hypothesis is correct, most, if not all, effector proteins should unfold at low force.”

From their data, the team realized that the mechanics of how these proteins unfold might shed light on another outstanding question in the field. Proteins that have the same structural fold and carry out the same function are homologues. Homologues usually have very similar protein sequences, the linear list of amino acids that make up the protein. However, protein sequences of effector proteins have virtually no similarity with homologues that are not secreted. First author Marc-André LeBlanc suggested that it is the evolutionary pressures for these proteins to unfold at such low forces but maintain typical thermodynamic stabilities so they refold efficiently that causes their sequences to look so different. Perkins added. “Looking forward, one of the things we’re planning to investigate is if homologues that don’t go through the type III secretion system are more mechanically robust.”

If these non-secreted homologues are more mechanically robust, then there was likely evolutionary pressure for these effector proteins to diverge from their homologues in the case of folding mechanics. This possible evolutionary pressure may provide insight into the factors that control protein folding and stability, which is what the Perkins and Sousa Labs are currently studying by using AFM to investigate targeted mutations in their model effector proteins.

The research is still ongoing. LeBlanc is looking forward to using the newly developed technology to not only expand the research, but give the study possible medical applications. “Everything is based on basic research at this point.” LeBlanc said. “But you can play that forward and start to think about applications. There are some labs using the type III secretion system as a protein delivery mechanism. You can certainly imagine if you have a protein that you want to get into another cell, this might be a good way to do it.” While the study is still in early development, the researchers are excited to see the applications of their newly developed technologies and the impacts of their work on the field of biophysics as a whole.

This paper was published in Proceedings of the National Academy of Sciences on March 23, 2021.

In a new paper, JILA physicist Thomas Perkins collaborated with CU Biochemistry Prof. Marcello Sousa to dissect the mechanisms of how certain bacteria become more virulent. The research brings together the Perkins lab expertise in single-molecule studies and the Sousa lab expertise in the type III secretion system, a key component of Salmonella bacteria.