The Electron Stops When The Bands Play On 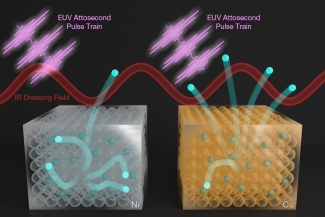 In an experiment using ultrafast laser light, the Kapteryn/Murnane group was able to see how electrons talk to each other in different materials. Researchers observed photoelectrons coming out of copper (r) for 100 as, but most of the photoelectrons produced in nickel (l) were deflected into empty states where they couldn’t be seen.

The Kapteyn-Murnane group has come up with a novel way to use fast bursts of extreme ultraviolet light to capture how strongly electrons interact with each other in materials. This research is important for figuring out how quickly materials can change their state from insulating to conducting, or from magnetic to nonmagnetic. In the future such fast switching may lead to faster and more efficient nanoelectronics.

In this work, graduate student Cong Chen, research associate Zhensheng Tao, and their colleagues used sequences of attosecond (10-18 s) bursts of extreme ultraviolet light to compare how long it took an electron to be emitted from the same energy levels, or bands, in two different metals––copper (Cu) and nickel (Ni).

In the past, scientists thought that the photoelectric effect, in which a high-energy photon kicks out an electron from a material, was instantaneous. More recently, with the advent of shorter and shorter laser pulses, scientists have been able to investigate such super-fast processes directly. And, they have discovered many surprises. In Chen’s and Tao’s work, the researchers found that the photoelectron lifetime was 100 attoseconds longer in Cu than that in Ni––even though the two metals sit side by side in the periodic table and the photoelectrons were ejected from the same bands.

There is a key difference between the two materials, however. Nickel has more high-energy states that are normally empty. Thus, when an electron is kicked out of nickel, it has a significant probability of interacting with another electron on its way out. This interaction sends the photoelectron into one of nickel’s empty states, and the photoelectron loses energy in the process. If this electron-electron scattering process occurs, it is difficult to measure the photoelectron. The result is a reduction of the photoelectron lifetime in nickel.

In contrast, when the laser light knocked out a photoelectron in copper, the researchers were able to “watch” it for 100 attoseconds. This ability to monitor electron behavior in real time should help scientists answer many important questions about materials where electron interactions are important.

“This experiment enables a real time view of exactly how electrons are talking to each other in different materials,” Margaret Murnane explained. “Nickel is more complicated in terms of how the electrons talk to each other than is copper. This experiment is the first measurement that can distinguish between the rearrangement of electrons, called screening, and the interaction of electrons, called scattering.”

Interestingly, the rearrangement of electrons is slower than100 attoseconds, i.e., less than the photoelectron’s lifetime. Also, since the researchers were able to directly measure electron scattering, they can use this information for the first time to disentangle which material's properties were dominated by electron screening or scattering.  As a result, this experiment has opened the door to experimentally verifying the fundamental electron-electron interactions that theorists calculate. These seminal results were reported online in the Proceedings of the National Academy of Sciences U.S.A. on June 19, 2017.