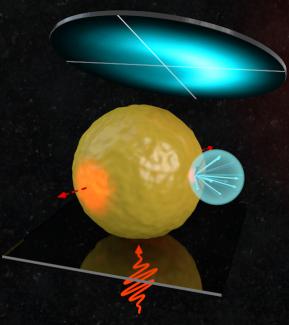 Incident Infrared laser light (red) on a gold nanoshell (about 150 nm in diameter) coaxes electrons to stream (blue arrows) out of the surface; the electrons are then measured by a detector (cyan disc). A low-energy stream of electrons has many applications for electron imaging. Â The dashed red line represents an external Electric field along the laserâ€™s polarization axis. The diffuse red glow on the sides of the shell represent the near-field enhancements due to plasmonic effects.

JILA researchers have created a laser-controlled "electron faucet", which emits a stable stream of low-energy electrons. These faucets have many applications for ultrafast switches and ultrafast electron imaging.

The electron faucet starts with gold, spherical nanoshells. “They are glass cores with a thin, gold layer over them,” said Jacob Pettine, the graduate student on the project. These nanoshells are truly on the nanoscale, measuring less than 150 nanometers in diameter, which is “something like a thousandth of the size of a human hair,” said Pettine.

These gold nanoshells source the electrons for Pettine’s faucet.  By showering the gold nanoshell with visible laser light, Pettine and Nesbitt are able to coax out an electron stream.

Electron emission is not inherently peculiar. The well-known photoelectric effect explained by Einstein describes emission of electrons when light shines on a material. Metals are particularly good materials for electron emission because they have large numbers of electrons not bound to atomic nuclei, but free to move throughout the metal.  Collectively, these free electrons are called a “Fermi sea,” evoking their ability to move freely in response to external forces.

These electron waves slosh like coffee in a moving mug. And much like a walker’s coffee, sometimes, electrons slosh out of their container. These “sloshed electrons” make up a metal’s electron emission.

But when Pettine showered the gold nanoshells in laser light, he noticed something peculiar about their electron emission.

According to Pettine, it was peculiar that the electrons emerged in only one direction. Typically, electrons to fly off in all directions, like water splashing off of a round stone.

Even more peculiar, Pettine and Nesbitt saw the direction of the electron flow change abruptly when they rotated the laser’s polarization.

These peculiarities began to make sense once Pettine examined the gold nanoshells under a microscope. The nanoshells were not as spherical as expected.

“Bumpy,” is how Pettine described the nanoshells.  “And It turns out that if you have just the right defect geometry [variation from a perfect sphere], you get really, really strong electric field enhancements in that region.”

These defects, or nanocrevices, on the gold nanoshells can become “hot spots” because electric fields tend to build in curvier regions.

And the buildup of an electric field makes the crevice the easiest place for electrons to jump ship. Essentially, the crevice becomes a hot spot that emits electrons like a never-ending geyser. But the geyser is more like a trickle, says Pettine, as the electrons have been coaxed out at low energy, rather than forcibly ripped away.

But the physics doesn’t stop there. “By tuning our polarization, we can actually couple to a different defect, make it a hot spot, and kick electrons off in a different direction,” said Pettine.

Changing the polarization, which is the axis of the laser’s electric field, can activate different hotspots because the nanoshells’ crevices materialize in random directions, and the crevices only resonate (make waves) for electric fields perpendicular to their geometry.

In the future, Pettine and Nesbitt would like to apply this technique to other nanoparticles, including nanostars, which Pettine describes as having a sea-urchin shape. Unlike the accidental crevices appearing in the gold nanoshells, the nanostars have pointy “spines” that provide large surface curvatures in many directions. By shining polarized laser light onto the nanostars, Pettine and Nesbitt hope they can gain more control over the direction of the electron emission.

A laser-controlled electron faucet with directional control has many applications in the field of electron imaging. Ultrafast laser pulses on the order of femtoseconds (10-15 seconds) could enable electron faucets that can switch from off, to on, and off again, on the order of femtoseconds. Such techniques could lead to improved electron imaging systems able to record dynamics on the speed at which molecules vibrate.

This work, published in the Journal of Physical Chemistry C in June of 2018, was authored by JILA graduate student Jacob Pettine, former JILA postdoc (now at Goddard NASA) Andrej Grubisic, and JILA Fellow David Nesbitt. The work was funded by the Air Force Office of Scientific Research and the National Science Foundation.