The inside story of a simulated galaxy 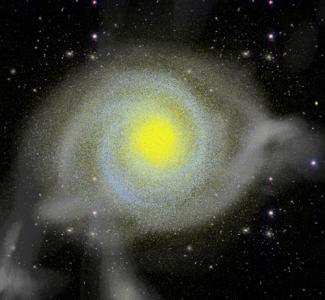 A point in time during the simulated evolution of a disk galaxy. Older stars are yellow, and newer ones are blue. A close-in look at the model's galaxy center has revealed conditions that could be conducive to the formation of a supermassive black hole.

Graduate student Robyn Levine, Fellow Andrew Hamilton, and colleagues from the University of Chicago’s Kavli Institute for Cosmological Physics are working on modeling how supermassive black holes grow inside galaxies. They recently published the first of what will be a series of papers on a unique cosmological simulation of the growth and evolution of a disk galaxy. What’s unusual about this simulation is its ability to model physics over a large dynamic range, starting with the formation of a large-scale (gas-cloud) structure and zooming into the outer edge of a black-hole accretion disk in the center of the galaxy.

The researchers adapted their simulation to run at its highest resolution only on scales that reveal the central black hole’s accretion disk and its environment. By doing it this way, they have been able to create a realistic model of galaxy growth and evolution over distances and times that vary by as much as eight orders of magnitude.

Initially, they focused on the behavior of the gas in the center of the galaxy at one point in the galaxy’s history. They found a cold, molecular, self-gravitating, and rapidly rotating gaseous disk. The accretion disk appeared to be relatively stable over at least 100,000 years (i.e., the duration of the simulation). However, large waves and instabilities caused the disk to become quite turbulent. This turbulence prevented the disk from fragmenting into stars, despite its being very cold and self-gravitating. There was enough instability in the disk, however, to transport large amounts of the gas into the center of the disk, where it could feed a black hole. The simulated accretion disk looked as if it could continuously feed a central black hole without being interrupted by fuel-depleting bursts of star formation.

Next, the researchers want to model the accretion rate for black-hole feeding. They also want to find out whether the accretion disk will stay stable for the 10 million years it would take to build a supermassive black hole. To do this, they plan to investigate black-hole growth at different times in the history of the galaxy, including one in which the galaxy merges with another small galaxy containing a black hole. They’d like to determine whether the growth of the central black hole inside the simulated galaxy occurs in a series of short fueling events or by continuous fueling over millions of years. Eventually, they want to compare black-hole growth in their simulated disk galaxy with observations of active galactic nuclei.   - Julie Phillips