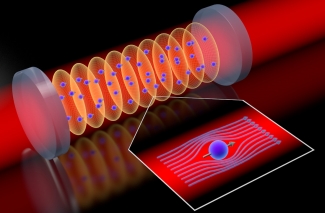 The idea of quantum simulation has only become more widely researched in the past few decades. Quantum simulators allow for the study of a quantum system that would be difficult to study easily and quickly in a laboratory or model with a supercomputer. A new paper published in Physical Review Letters, by a collaboration between theorists in the Rey Group and experimentalists in the Thompson laboratory propose a way to engineer a quantum simulator of superconductivity that can measure phenomena that, so far, are inaccessible in real materials.

JILA Fellow, NIST Physicist, and Adjoint Physics Professor James Thompson explained: “We are trying to simulate this much more complicated system. If we have all the ingredients that we want and have the probes we want, because it’s an artificial system we have the favorability that we are not constrained by problems such as femtosecond timescales. We have the timescale set by our ingredients, which are more favorable. We see the same physics but with different components building it up.” The published paper highlights the importance of using quantum simulators to access difficult areas of research.

A New Way of Exploring Superconductivity:

Conventional superconductors, also known as Bardeen-Cooper-Schrieffer (BCS) superconductors in honor or John Bardeen, Leon Cooper, and John Robert Schrieffer, who first developed a theory that explained the superconductors' microscopic origin, have been studied by physicists for decades. Besides their fundamental interest, what makes superconductors important is their ability to sustain a persistent current without the need of a power source due to their zero electrical resistance and their capability to expel magnetic fields from their interior.

In a BCS superconductor, under specific conditions and below a critical temperature, electrons can overcome their electrostatic repulsion and manage to attract each other, forming Cooper pairs. When Cooper pairs are created, the material becomes a superconductor. In real materials, superconductivity is induced by slowly changing the system parameters such as temperature or pressure in a way that the material remains always at thermal equilibrium.

The Rey group and Thompson laboratory were looking at superconductors differently. The team focused instead on abrupt, or dynamical, changes in parameters where the transition between a normal and a superconducting system happens suddenly. However, to avoid cooling the system down to a low critical temperature, the Rey group proposed a different method of studying dynamical changes in superconductivity: Instead of using Cooper pairs of electrons in solids, they proposed to use atoms with two internal levels interacting via the exchange of photons in an optical cavity. The two internal states served as a spin degree of freedom. In that way, atoms in the optical cavity would act as a quantum simulator of a BCS superconductor.

As Ana Maria Rey, JILA Fellow, NIST Fellow, and Adjoint Physics Professor, described: “An optical cavity is formed by two mirrors which allow light to bounce back and forth between them many times. Only a small part leaks outside the mirrors. An atom inside an optical cavity can emit a cavity photon and flip its spin from up to down.” The spin flip-floping process mediated by the photons can emulate the attractive interactions experienced by electrons in a superconductor that lead to the formation of Cooper pairs.

First author Robert Lewis-Swan clarified that the team encoded the presence or absence of a Cooper pair into the atomic spin degree of freedom. “We have this spin-half degree of freedom, and we can translate that to: do we have a Cooper pair or don’t we have a Cooper pair?” Not only could the proposed cavity scheme allow for the researchers to learn more about dynamical processes in superconductors, but could also allow them to easily manipulate parameters within the simulator to access regimes not possible in solid state systems. Lewis-Swan added: “We have the control to shift the kinetic energies of the individual Cooper pairs by applying additional optical fields or magnetic fields to the atoms in the cavity, or by using different internal levels of strontium atoms.” These extra controls would let the team tune the system with the quantum simulation, something difficult to achieve in a superconductor.

Light leaking out of the cavity: An excellent probe

In addition to atoms inside the optical cavity lettting both the Rey and Thompson groups emulate the behavior of Cooper pairs in a superconductor,  the light emitted out of the cavity would allow them to dynamically extract information on the behavior of the atoms without perturbing them. According to Lewis-Swan: “Because we have a cavity, and because our Cooper pairs kind of talk through the cavity, the light that bounces between the mirrors can eventually leak out. Essentially, information about the effective Cooper pairs inside the cavity is mapped onto that light field. So, in principle, if we put a detector outside and watch the light coming out, we can actually learn about what is going on inside the cavity in real time.” Thompson added: “We actually can think about our atoms as described by some kind of arrow that points in space. Basically, the arrow tells us information about what the Cooper pairs are doing. That’s really building on these techniques called quantum non-demolition measurements that often happen in my lab in both the rubidium and strontium experiments. But, it’s being done in a really weird limit. It’s a particularly strange limit you have to work in because the dynamics are still kind of fast compared to how fast the cavity itself likes to respond.”

Although the current paper summarizes the theoretical proposal and explains the types of control the experiment needs to achieve to observe dynamical phases of superconductors in JILA's cavity simulator, the Thompson group expects to be able to actually observe the phases and the predicted emergent dynamical behaviors for the first time in an experiment soon.

The building of this cavity setup illustrates the importance of quantum simulators within research, as they allow the researcher to push the limits of science further in search of new knowledge.

Funding for this research was supported by AFOSR, DARPA, ARO , and the NSF.

The idea of quantum simulation has only become more widely researched in the past few decades. Quantum simulators allow for the study of a quantum system that would be difficult to study easily and quickly in a laboratory or model with a supercomputer. A new paper published in Physical Review Letters, by a collaboration between theorists in the Rey Group and experimentalists in the Thompson laboratory, proposes a way to engineer a quantum simulator of superconductivity that can measure phenomena so far inaccessible in real materials.