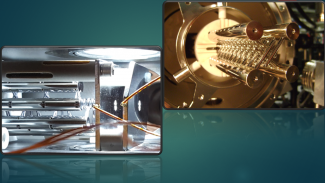 Our research uses supersonic expansion coupled with Stark deceleration to cool and slow polar molecules. We start by expanding a mixture of Krypton and the molecule of interest through  a small aperture into our vacuum system. The resulting pulse of ground-state molecules has a narrow velocity distribution in three dimensions and a mean longitudinal velocity of several hundred meters per second. The next step is to slow the molecules into the rest frame of the laboratory. After the expansion, the molecular pulse propagates through a skimmer, which allows for differential pumping between vacuum chambers. The molecules then fly into the entrance of a Stark decelerator. The geometry of the electrodes that make up the decelerator, creates a maximum of electric field in the longitudinal direction directly between electrodes. As the molecules propagate into an increasing electric field they lose longitudinal kinetic energy and thus slow down. We use a series of repeating electrodes to slow the molecules to rest for low-temperature collision studies.

We have two decelerators with distinct configurations of electrodes to slow cold molecules to rest. The details of deceleration and goals of each experiment are outlined in the following links: