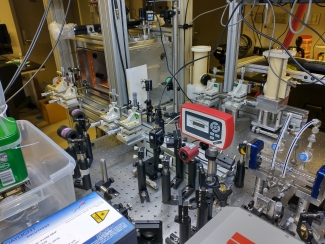 Spectroscopy is the study of how matter interacts with electromagnetic radiation. Molecular spectroscopy generally focuses specifically on the interactions with isolated molecules. One of the best ways to isolate the molecules of interest is by studying them in the gas phase. Generally speaking, gas phase measurements are the gold standard when it comes to high-resolution spectroscopy. Gas phase spectra do not suffer from the frequency shifts that are universally observed for matrix-isolation spectra. Gas phase measurements also allow for the study of species that would not exist long enough to probe in the liquid or solid states. When performing gas phase spectroscopy, it is often desirable to cool the species of interest as cold as possible, which has multiple benefits. At colder temperatures, there is reduced spectral broadening, such as Doppler broadening, resulting in narrower, better resolved bands in the measured spectra. Additionally, cooling also results in fewer initial quantum states of the molecules being populated, leading to fewer total bands observed in the measured spectra. This all results in a simplification of the analysis of the resulting spectra. Using a Cryogenic Buffer-Gas Beam (CBGB) setup enables all of the benefits of measuring cold, gas phase spectra. There are two main portions of this experimental setup – generating the buffer-gas cooled molecules and probing the mid-IR spectra of these cold molecules. Click on the topics below to learn more about each portion of the experiment.