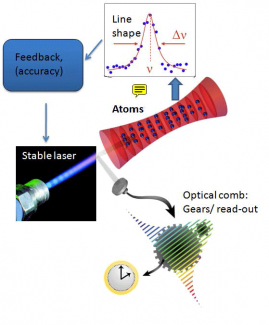 State-of-the-art optical clocks based on neutral AEA such as Sr or Yb, have demonstrated precise quantum control of the electronic spins, with fractional frequency stability on the clock transition at one part in 1016, thereby surpassing the precision of the cesium (Cs) standard and making them competitive with the most stable single ion clocks in the world. These clocks employ an optical lattice to tightly confine the atoms. The advantage of neutral atoms clocks over single trapped ion clocks is that, in the former, a large number of atoms is simultaneously interrogated. This could lead to a large signal-to-noise improvement; however, high atom numbers combined with tight confinement also lead to high atomic densities and the potential for non-zero collisional frequency shifts via atom-atom interactions. 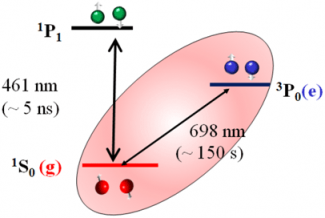 To suppress these interactions, the use of ultra cold, spin- polarized fermions was proposed. The idea was to exploit the Fermi suppression of s-wave collisions while freezing out p- and higher wave collisions at ultra cold atomic temperatures. However, non-zero collisional shifts have been measured in spin polarized fermions, first at the JILA Sr clock and later at the NIST Yb clock. Collisional shifts actually give rise to the second largest fractional errors, after blackbody radiation, in those systems. The understanding of the many-body interactions and dynamics in two-valence-electron atoms is then fundamental for the further development of atomic clock technology.

We have developed simple models capable of explaining the collisional frequency shift measured in recent experiments. Our work  demonstrated the leading role of p-wave collisions and the understanding of those also allowed the groups to reduce the collisional frequency shift below 10-18 .These improvements have eliminate the compromise between precision and accuracy in a many-particle system, removing a fundamental obstacle to building optical atomic clocks with large ensembles of neutral atoms.

At a first glance, the construction of a quantum simulator and of an atomic clock might not seem to have much in common. However, there are close ties linking them. The simulation of the proposed Hamiltonians necessitates a precise knowledge of the microscopic parameters governing the interactions of the atoms with other atoms and with the laser beams applied to manipulate them. Equally important are the characterization of decohering or dephasing mechanisms arising from the interaction of the atoms with themselves or with fluctuating electromagnetic fields.

The big idea our group, in close collaboration with the JILA world-leadings Sr and NIST Yb optical lattice clocks is to  exploring the  use of  the exquisite control of precision measurements to study a many-body system. We want not only to use this understanding to extract information of the microscopic parameters but, one step further, we want to use the clock itself as a quantum simulator of interacting open driven quantum systems. Moreover, as a bi-product, the understanding of the many-body physics will allow important improvements in clock performance.

At this point it is important to emphasize that recent advances in modern precision laser spectroscopy, with record levels of stability and residual laser drift less than 5 mHz/s are allowing us to deal with clocks operated at a very different type of conditions than those ones dealt with just a few years ago. Current clock experiments are able to achieve sub-Hz spectral resolution and to operate at Rabi frequencies less than a Hz and thus smaller or comparable to characteristic atomic interaction energies.

In our recent work we have demonstrated that finite temperature effects only affect the dynamics through a renormalization of the microscopic parameters. For the first time we used the clock as a  laboratory for the simulation of quantum magnetism without the complications of reaching the picoKelvin temperatures set by the small super-exchange interactions in ultra-cold atoms experiments. Although the investigation so far has been restricted to nuclear-spin–polarized gases, we are currently exploring  similar many-body effects in a clock making use of additional nuclear spin degrees of freedom with SU(N) symmetry. It will be outstanding if we can use the clock to investigate unconventional frustrated quantum magnetism.