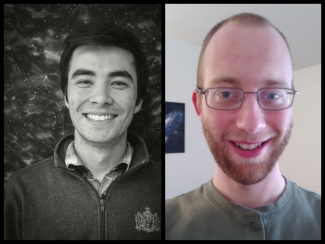 Two JILA graduate students were awarded "Oustanding Service Awards" from the Physics department at the University of Colorado Boulder. These awards are given each semester.

Tyler McMaken
Tyler McMaken won the CU Physics award for “ Outstanding Service," specifically for: "Outstanding contributions to CU Prime over many semesters, including leading the Phys 1400 Scientific Inquiry course"  Tyler McMaken is a current third-year Ph.D. student from Ohio researching theoretical astrophysics with JILA Fellow Andrew Hamilton. His studies focus on the inside of black holes, where he works on both visualization and fundamental research on how general relativity and quantum field theory combine in one of the most extreme parts of the Universe. Tyler also has a passion for teaching, stemming from his past work as an educator at a science museum for almost a decade. At CU, after a year of being a general physics TA, Tyler became a co-instructor for CU-Prime's class on the Fundamentals of Scientific Inquiry.

Sean Muleady won the CU Physics award for "Outstanding Service," specifically for: "Outstanding contributions to PISEC as a site leader." Sean Muleady is a current Ph.D. student at JILA studying under JILA Fellow Ana Maria Rey. His research focuses on  AMO platforms to realize complex many-body phenomena and exotic phases of matter and to understand the growth of quantum entanglement in these systems. Muleady has a passion for mentoring and helping others through working at the group Partnership for Informal Science Education in the Community (PISEC). PISEC studies the effect of the outreach program on K-12 populations underrepresented in the sciences as well as on university students participating in the program.

Congratulations to both Tyler and Sean!