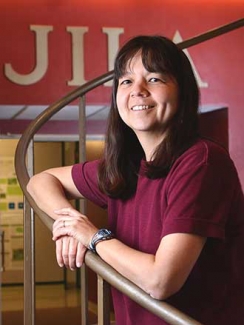 Friday, September 7, 2018 - Boulder, CO –  As the bike rack outside the Millennium Hotel overflowed, many scientists locked their bikes to a nearby fence. In the Grand Ballroom, free coffee was flowing and over 100 physicists specializing in atomic matters were conversing. Despite the global diversity, everyone recognized faces in the crowd. These physicists all had something in common. They all once worked closely with Deborah Jin.

Held just before Jin’s 50th birthday, this event was not unlike most other “fests” celebrating a scientist’s lifetime of achievements, said Eric Cornell, a conference organizer and close colleague of Jin, except that Jin died of cancer 2 years prior. This conference now celebrated Jin’s contributions without her presence.

Shortly after her appointments as NIST physicist and CU Boulder professor were cemented, Jin pioneered the development of ultracold atomic fermions. This work advanced our understanding of quantum behaviors, such as those in superconductors and chaotic cosmological environments, like neutron stars. 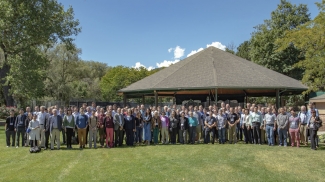 The Jin Fest, held September 7–8, 2018, had over 100 scientists in attendance to celebrate the scientific legacy of Deborah Jin.

Not one to rest on prior achievements, Jin quickly advanced to a second frontier, as she and JILA Fellow Jun Ye created the first ultracold gas of polar molecules, enabling the first studies of ultracold chemistry.

In her lifetime, Jin was honored by many prestigious scientific societies. Specific awards include the Isaac New Medal from the Institute of Physics, the Comstock Prize in Physics from the National Academy of Sciences, and the Benjamin Franklin Medal in Physics from the Franklin Institute. Jin was also named a John D. and Catherine T. MacArthur “genius” fellow, a Scientific American Research Leader of the Year, one of the “Most Influential Scientific Minds of 2014” by Thomson Reuters, and was rumored to be a strong candidate for the Nobel Prize in Physics.

Since her passing in 2016, Jin has continued to be honored by awards established in her name . This fest sought give those who know her best a chance to reflect on the impact of her work.

The conference program was organized by JILA Fellows Jun Ye, Ana Maria Rey, Cindy Regal, Eric Cornell, and John Bohn. While all worked closely with Jin, their relationships varied. Ye and Rey were close collaborators with Jin. Regal was a former student, later colleague. Cornell was a former advisor, later colleague. And Bohn was Jin’s longtime colleague, friend, and husband.

Over the two-day event, 18 talks presented new developments in the fields of ultracold and condensed atom dynamics. The speakers’ relation to Jin varied from former students to self-described longtime colleagues, competitors, and friends. While each presentation varied in content, one theme tied them closely: Jin advanced each research project, whether through direct correspondence or the laying of foundation.

The first speaker of the conference, Francesco Ferlaino, succinctly described the feelings suspended in the room. “I feel scientifically happy,” she said, citing the opportunity to discuss how she had furthered Jin’s research contributions, “but also sad, that she is not sitting in the audience, enjoying her legacy.”