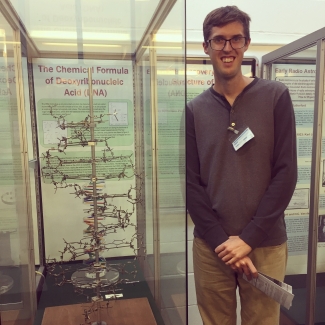 Post-doc David Jacobson in JILA Fellow Tom Perkins’ Laboratory was ecstatic to discover he had won the competitive NIH K99/R00 Pathway to Independence Award. “The process of applying for this award is very involved.” Jacobson said.  “I had been in Tom Perkins’ group for three years when I applied. And you write this big proposal describing the two phases, one you do as a post-doc and one you do as an independent investigator. So, you prepare this big document and send it in. It feels like you’ve done a lot of work. Then you wait a long time. And so, when I finally got it, I was kind of relieved that this process was over and, of course, very excited.”

When asked about this type of award, Jacobson explained that: “this is a career transition award, so there are scientific goals, but one of the main goals is my career. So, it’s very humbling to think that the National Institute of Health (NIH) has set aside a fairly large amount of money to promote my career.” This grant program from the NIH strives to support post-doc and clinician-scientists who currently work in mentored research positions in transitioning to independent investigator positions in academia. “In the short term,” Jacobson added, “it allows me to continue to work on what I’ve been doing with Tom Perkins, which is single molecule biophysics experiments on membrane proteins. When I get to the point where I am a professor somewhere, hopefully, it’ll give me a lot more initial support to start building a lab and really dive into research.”

In anticipating his next career moves, Jacobson commented: “I want to take the techniques I’ve learned from working with Tom at JILA, and start to apply them to other biological systems that are more directly biomedically relevant than what we’re working with now. And this award, getting $250,000 a year in research support, is enough, for example, to hire two people. Your lab can start bigger sooner, and hopefully you get better results faster.” Through this program, Jacobson will get the financial support he needs, along with a network of fellow cohorts, to transition successfully into the next phase of his career.

Jacobson’s goal is to become a professor. As a post-doc, he is currently researching the biophysics of membrane protein folding, as well as improvements on AFM-based force spectroscopy techniques within the Perkins Laboratory. In transitioning forward, Jacobson hopes to continue researching protein folding physics. “I plan to work on the Arginine Vasopressin Receptor 2 protein system. I chose that because it has interesting biomedical implications, in particular for the urinary condition diabetes insipidus, which can be caused by mutations in this protein. There is great interest, from a biomedical point of view, in doing detailed physical studies of the energetics of how this protein assembles and folds. And it is also a protein I think I will be able to work with...”

Looking back on his work to achieve this prestigious award, Jacobson thanks his mentor, Tom Perkins. “The thing that has always impressed me with Tom is that over his time as a professor in JILA, obviously he’s worked on many projects, but there’s always in the background this overarching project of advancing the underlying measurement technology that we’re using.” Jacobson hopes to mimic Perkins’ goals of advancing technology in his own future work. He is grateful to be receiving this award, and can’t wait to get started in reaching his career goals.