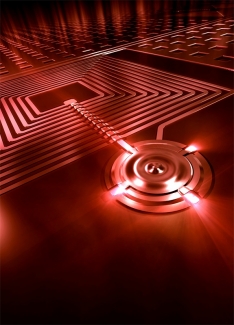 Artist’s concept of the Lehnert group’s information transporter. The transporter moves quantum information back and forth between an electronic circuit and a tiny vibrating drum.

The Lehnert group has come up with a clever way to transport and store quantum information. Research associate Tauno Palomaki, graduate student Jennifer Harlow, NIST colleagues Jon Teufel and Ray Simmonds, and Fellow Konrad Lehnert have encoded a quantum state onto an electric circuit and figured out how to transport the information from the circuit into a tiny mechanical drum, where is stored. Palomaki and his colleagues can retrieve the information by reconverting it into an electrical signal.

This transportation scheme should make it possible to uses tiny drums for memory storage in quantum computers. It also opens the door to using the drums as intermediaries in systems that convert quantum information from one physical system, such as a microwave field, into another physical system such as a laser light field.

The setup for accomplishing this information shape shifting is shown in the figure. A microwave field, which runs diagonally across the top, passes through the square-shaped circuit into the drum at the lower left of center. The vibrating metal drum is itself part of the electrical circuit transporting the information that makes the drum pulsate.

This nifty information transporter was described in a recent article in Nature. One possible future use for it may be in quantum information processing. The transporter can store quantum information in the mechanical energy of the tiny vibrating drum a hundred times longer than it can be stored in other forms of energy. Once this quantum storage capacity is developed, it could prove invaluable for the design of quantum computers, for example.

The transporter may also one day play a role in transferring quantum information from a microwave light field to a laser light field. Right now, these two forms of electromagnetic radiation cannot communicate with one another on the quantum level. Once the Lehnert and Cindy Regal groups succeed in building a new transporter that connects a vibrating mechanical drum with a laser light field, it may be possible to build a supertransporter to send quantum information back and forth from a microwave field (the realm of electronic devices) to a visible light field. Such an information supertransporter could open the door to quantum systems engineering on a grand scale. — Julie Phillips