Threads of Stars and Shadow 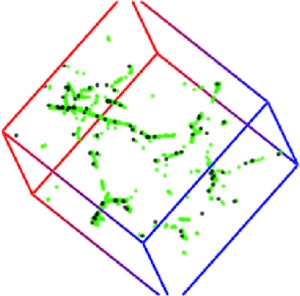 The "dark ages" of the early Universe drew to a close with the appearance of enough stars to strip electrons off most of the hydrogen atoms in the gas clouds between galaxies. By a billion years after the Big Bang, these reionized atoms had rendered the Universe transparent to light. About 12.7 billion years later, visiting JILA member Gayler Harford, Fellow Andrew Hamilton, and Nickolay Gnedin of the Kavli Institute for Cosmological Physics decided to investigate the structures formed by ordinary matter (baryons) and dark matter soon after the reionization process was complete.

For this study, Harford analyzed a high-resolution cosmological simulation developed by Gnedin. This simulation includes detailed physics of baryons at high redshift. She discovered that ordinary matter formed filaments connecting the largest galaxies, as shown in the figure. These cosmic threads radiated directly from the galaxy centers and may have functioned as "superhighways" for accreting gas onto galaxies to fuel star formation. Since the ability of galaxies to accrete gas is necessary for sustained star formation, the baryonic filaments may hold the key to deciphering widespread stellar genesis in the early Universe.

In the simulation, many filaments had thin sheets of gas radiating away from them. Harford said that the planar distribution of our Milky Way's satellite galaxies (including the Large and Small Magellanic Clouds) may have been caused by one such primordial sheet.

In contrast to the formation of sheets and threads, the simulation showed that dark matter was concentrated into globular shapes located somewhat irregularly along the filaments of ordinary matter. There was a marked separation of dark and ordinary matter, but the mechanism responsible for this is thus far unclear. Harford said the separation might have something to do with the fact that parcels of dark matter can readily pass through each other, but clouds of collapsing gas cannot.

The next step will be to understand how the various structures evolve with time and to look for insights into the mechanisms involved. The findings may relate to the spectra of distant quasars.   - Julie Phillips