Something New Under the Sun 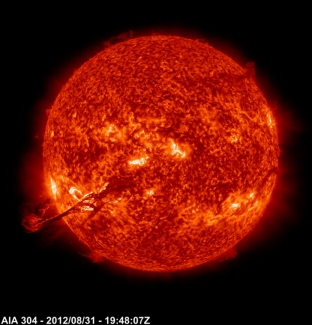 Solar Dynamics Observatory photograph of the Sun’s corona. Deep inside the Sun, hurricane-like swirling columns generate megameter-sized granules and 30 megameter-sized supergranules that appear under the corona on the Sun’s surface. Credit: sdo.gsfc.nasa.gov

Stars like the Sun have to get rid of the heat generated by thermonuclear reactions in their centers. The Sun’s secret is vigorous convection, particularly in the outer third of the Sun closest to its surface. Like a pot of boiling water, hot fluid moves upward and cooler fluid moves downward, carrying heat outwards toward the surface of the star. For a long time, astrophysicists thought these motions came in two different sizes called granules (because these megameter-sized structures looked like grains of rice through early telescopes) and giant cells.

The trouble with the giant cell idea is that while granules appear on the Sun’s surface, giant cells have never been seen in spite of the fact astronomers have been looking for them for a long time. And, if giant cells exist, they would be 200 megameters1 wide, which is definitely large enough to be detectable. For instance, the largest cells seen in the Sun, called supergranules, are only about 30 megameters wide. Featherstone’s and Hindman’s new theory explains why supergranulation appears and why giant cells are absent. 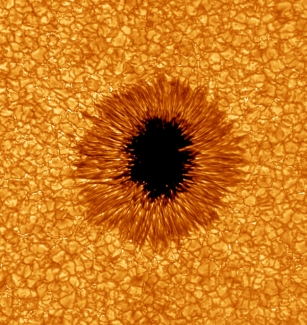 Sunspot on the surface of the Sun surrounded by megameter-sized granules.

“I’ve been thinking about this problem for about 10 years,” Hindman said. “About two to three years ago, I decided we should accept the huge volume of observational data that has never detected a single giant cell to mean that they aren’t there.”

Hindman and Featherstone used some fancy math and numerical simulations that included rotation and coriolis forces to see what might actually be generating supergranules on the surface of the Sun. Much to their surprise, they discovered multiple column-like structures not unlike spinning hurricanes on Earth.

“There is nothing like this on the surface of the Sun,” Hindman explained. “Instead they exist below the surface in the top third of the Sun, but why?”

The answer is simple. Deep layers of the Sun have fluid motions with the same time scale as the Sun’s period of rotation. These deep-layer structures are prone to spin, unlike what happens near the surface where lateral flows are much faster. And, the columns must be smaller than 30 megameters in radius, or telescopes would have detected them long before now.

Thus it seems, the Sun has two distinct layers of convection: (1) a deep layer where little spinning columns form, and (2) a layer near the surface where flows are too fast to form columns, so they form granules and supergranules.

The conclusion is clear: The Sun has no giant cells, which is why no one has ever seen them.––Julie Phillips

The Sun isn’t working the way we thought it did.