The Long and the Short of Soft X-rays 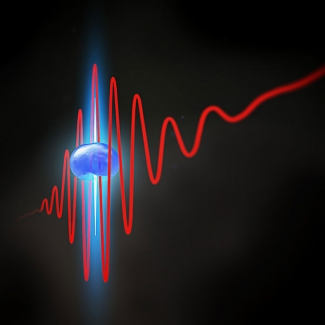 Long-wavelength mid-infrared light interacting with argon atoms in a process known as high-harmonic generation leads to the production of isolated bursts of ultrashort-pulse soft x-rays, which are tens to hundreds of attoseconds (10-18 s) long. Credit: The Kapteyn/Murnane group and Steve Burrows, JILA

Mid-infrared (mid-IR) laser light is accomplishing some remarkable things at JILA. This relatively long-wavelength light (2–4 µm), when used to drive a process called high-harmonic generation, can produce bright beams of soft x-rays with all their punch packed into isolated ultrashort bursts. And, all this takes place in a tabletop-size apparatus. The soft x-rays bursts have pulse durations measured in tens to hundreds of attoseconds (10-18 s).

Theorists and experimentalists working together hand in hand were able to learn to create bursts of attosecond soft x-rays via high harmonic generation, which has been used extensively and effectively by the Kapteyn/Murnane group. In high harmonic generation, x-rays are produced when electrons are first plucked from argon atoms by a mid-IR laser and then smashed back into their parent ions when the oscillating field of the laser reverses (like the motion of a boomerang). The atoms then naturally emit their excess energy as isolated bursts of soft x-rays. (These harmonics of laser light are like the audible overtones that you can hear when a piano key or guitar string is struck hard.)

The fact that the high harmonics emerged as isolated attosecond bursts of soft x-rays was a beautiful confirmation of theory work that suggested that making attosecond pulses in the soft x-ray region might be possible. But, until the experimental physicists could actually measure the pulses, this theory could not be tested. However, measuring these pulses was no small feat. First, the attosecond pulse had to be split into two parts. Then a special beam separator had to delay part of the pulse (by a distance of just .5 nm) so the two parts could interfere with each other, creating a short burst of soft x-ray light.—Julie Phillips