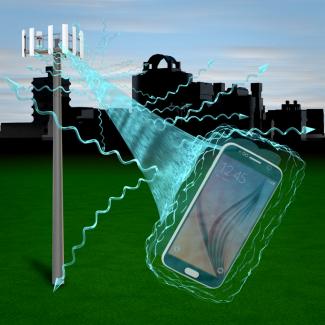 Artist's concept of the distortions that can occur when a cell phone communicates with a cell phone tower. Associate Fellow Graeme Smith is working on a mathematical method for taking complex quantum formulas describing this kind of communication and making them as easy to use as classical formulas.

When Steven Spielberg’s adorable extra-terrestrial, E. T., wanted to phone home, he should have contacted an information theorist like JILA’s Graeme Smith. Smith could have at least explained how E. T. could have used a cell phone to send a low-noise message to a cell phone tower,1 and from there––well to outer space (which is a problem that's much, much harder to solve than cell phone to cell phone tower transmissions).

“Think of a cell phone,” Smith said. “You have some message you’re trying to send to a cell tower, and the electromagnetic signals that come out of your phone are going to get distorted as they travel through the air to the tower. The signals get bounced around or even lost.” That’s why all cell phones and towers must use error-correcting codes.

However, being an information theorist, Smith is looking at quantifying how much error-free data it’s possible to send from a cell phone to the tower.

“When my cell phone tries to send a message to the cell tower, the electromagnetic signal gets distorted along the way,” Smith said. ‘You can actually write down a nice clean formula for how much error-free data you can send.”

The formula for classical communication channels (if there’s no quantum mechanics involved) was invented in the 1940s. The problem is that the nice, clean formula doesn’t work when quantum mechanics comes into play. Entanglement2 makes the situation a lot more complicated. In fact, the nice formula becomes insoluble.

So Smith is working on something called uniform additivity. Uniform additivity is a mathematical way of taking complex quantum formulas and trying to make them as easy to use as a classical formula. It’s a fascinating process.

He starts with a list of the basic answers that already exist to important questions in information theory. These are the most useful solutions in the quantum domain. And, if an answer isn’t on the list, it’s unlikely anyone can solve that problem. In other words, information theorists have some answers. Now they need to find the correct questions.

One of Smith’s favorite questions is, “How do I send quantum bits from here to there, if I know there is noise in between?” And, by better understanding the simple properties of noise, he hopes to learn how to transmit quantum states noiselessly in the presence of some noise. In recent work, he discovered an intriguing circumstance in which the classical and quantum descriptions of this process were identical.––Julie Phillips

2. Entanglement means that two or more particles interact and retain a connection. Once particles are entangled, if something changes in one of them, all linked partners respond.