This is the Dawning of the… Age of Entanglement 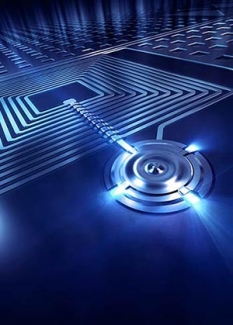 Using an electrical circuit (upper left), the Lehnert group has entangled the motion of a drum (lower right) with an electrical signal carried away from the circuit.

Tauno Palomaki and his colleagues in the Lehnert group have just gone where no one has gone before: They’ve entangled the quantum motion of a vibrating drum with the quantum state of a moving electrical pulse. What’s more, they figured out how to storehalf of this novel entangled state in the drum (which is tiny compared to a musical drum, but huge compared to the atoms or molecules normally entangled in a lab). The drum can then generate another electrical pulse that is entangled with the first one!  This amazing feat was reported in Science.

The Lehnert group’s entanglement of a 15-µm-diameter vibrating drum (a mechanical object) with an electrical signal (a.k.a. microwave field) promises to be a key ingredient in the design of future quantum processors and precision instruments to detect tiny forces currently too small to sense.  It may also be a step along the road to testing the limits of quantum theory itself.

Grasping the importance of this accomplishment requires a basic understanding of quantum entanglement, a strange phenomenon Albert Einstein called “spooky action at a distance.”   Entanglement means that the quantum states of something physical — such as particles, microwave fields, devices, or voltages — interact and retain a connection, sometimes over very long distances. Once entities are entangled, a measurement of one of them will always be correlated to the measurements of the others — even though the individual measurements appear to be completely random.

“Entanglement means having things tied together by quantum spaghetti,” Palomaki says. “Once it happens, things talk to each other in a mysterious way.“

One way to think about entanglement is to imagine two blindfolded bar patrons playing darts on opposite sides of the room. Separately, each one misses the bull’s eye by an unpredictable amount. But, if the players are entangled, a dart thrown by each one of them will hit the same point on separate dartboards.

Something similar happens in the Lehnert lab, but at temperatures of 15–20 mK. The motion of the cold drum is entangled with the voltage of an electrical signal as it moves away from the drum toward an amplifier. The correlation observed between the drum motion and the signal voltage cannot be described using the mathematics of ordinary, everyday physics. Explaining entanglement requires the peculiar mathematics of quantum mechanics.

All this isn’t quite as simple as it sounds. The drum has many possible combinations of position and momentum, and the microwave field has many possible values of amplitude and phase. However, when the researchers measure the microwave field, the measurement itself “forces” the drum into a particular position and momentum. And, once they measure the first pulse, the researchers know for certain what will happen when they measure the second pulse — because the second pulse contains the previous state of the drum. Nevertheless, before any measurements occur, it’s impossible to predict what’s going to happen!

That said, the new understanding of entanglement between a mechanical object, a microwave field, and signal voltage holds great promise for future research into the nature of the world we inhabit and the invention of some marvelous new devices. — Julie Phillips