Black Holes: The Inside Story 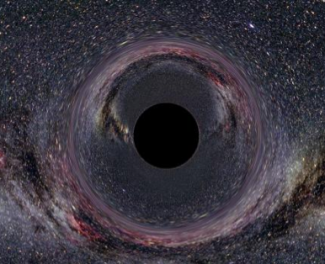 An artist's conception of a black hole.

What really happens inside black holes?

Andrew Hamilton and Scott Pollack, a graduate student in the Physics Department, recently decided to investigate the answer to this question. In the process, they developed a model using realistic physics that they believe better describes the internal structure of black holes.

The starting point for most black hole models has been the assumption that they are mostly empty except at the singularity. The problem with this assumption is that if black holes were empty and they rotate (and many do), they would be gravitationally repulsive in their cores. So say the principles of general relativity. However, if black hole centers are gravitationally repulsive, they cannot form a singularity. Yet, Roger Penrose and Stephen Hawking have predicted that all trapped surfaces, such as black holes, have a singularity inside them.

Not surprisingly, Hamilton concluded that black holes cannot be mostly empty. He then set out, with Pollack's help, to perform a rigorous mathematical analysis that suggested a different picture of the inside of a black hole. Other scientists had already deduced that (1) rotating black holes are egg shaped (elliptical) rather than spherical and (2) they have outer and inner horizons surrounding an inner core that contains the singularity. Hamilton and Pollack found that the space between the two horizons is, indeed, mostly empty. However, they also discovered that the inner horizon is violently unstable and generates a dense, hot relativistic plasma that funnels toward the singularity but never completely disappears into it. In fact, the plasma fills up the black hole's core out to the inner horizon. The singularity lies nestled inside the dense, hot plasma.

The new model confirms a 1919 prediction by Poisson and Israel that the instability of the inner horizon is caused by relativistic waves of baryons (the stuff that forms the Earth and all of us) streaming toward the inner horizon and waves of dark matter counter-streaming back toward the outer horizon. Sadly, the new model also shuts the gateway to alternative universes. Simple models of empty black holes produced worm holes inside black holes leading to white holes leading to alternate universes. While such ideas make good television (e.g., Star Trek episodes), there's never been evidence one way or the other whether these theoretical constructs actually exist. Hamilton and Pollack's analysis eliminates the worm holes and, with them, portals to other universes.

Hamilton said his model also has implications for how a person would be killed if she fell into a black hole. "If you fell into a stellar-sized black hole, the tidal forces on the river of space carrying you inside would tear you apart," he explained. "On the other hand, if you fell into a supermassive black hole where tidal forces would be weak, you'd be fried by the plasma." Hamilton and Pollack published two companion papers describing their work online in November 2004. Both have been accepted by Physical Review D.   - Julie Phillips