Complete control of molecular interactions by producing a molecular gas at very low entropy and near absolute zero has long been hindered by their complex energy level structure. Our lab has recently developed a number of technical tools, including laser cooling and magneto-optical trapping of polar molecules, coherent association of ultracold atoms into ground-state molecules, and cooling of molecules via evaporation.

Quantum degenerate gases of molecules have long been anticipated to open a new scientific landscape. However, the very complexity that makes ultracold molecules so enticing had made reaching degeneracy an outstanding experimental challenge over the past decades. The community faced two major limitations: the production of an adequate mixture of atoms to make a sufficient number of molecules, and rapid molecular loss through chemical reactions. While a low entropy sample of ground state molecules were produced in a 3D optical lattice in JILA in 2015, no one had successfully produced a bulk gas of stable molecules in quantum degeneracy.  This changed in 2019. We produced the first Fermi degenerate gas of ultracold polar molecules of KRb through coherent adiabatic association in a deeply degenerate mixture of a rubidium Bose-Einstein condensate and a potassium Fermi gas, resulting in 25,000 ground state molecules at temperatures around 0.3 times the Fermi temperature. It turns out that heteronuclear Feshbach molecules rapidly thermalize with both parent atoms. The molecules are thus created in thermal equilibrium, confirmed with observations of local number fluctuations that follow sub-Poissonian statistics, highlighting the central role of Fermi statistics in the properties of the gas. Something really exciting is also discovered in this Fermi gas of molecules:  as the molecules enter quantum degeneracy, this normally reactive gas becomes more stable. The interplay of quantum statistics and chemistry brings us a pleasant surprise.

More recently, we have demonstrated for the first time a strong suppression of reactive losses in molecules by applying an external electric field. This E field is used to tune elastic, dipolar interactions between molecules to be 100 times stronger than inelastic rates. This achievement marks an absolute game changer. Using dipolar interactions, we directly achieved molecular thermalization and evaporative cooling to increase the phase-space density of the molecular gas, reaching Fermi degeneracy in two dimensional optical traps.

Another major experimental milestone is the recent demonstration of resonant collisional shielding of reactive molecules using electric fields.  We control a resonant collision process by an external electric, building the capability of tuning the chemical reaction rate by three orders of magnitude. As a result, we can now fully suppress the reactive loss of ultracold molecular gases in the quantum regime. This provides a satisfactory solution to a long-standing problem that has plagued the field of molecular quantum gases since its inception.

Precisely controlling chemical reactions has been a long-standing goal of the cold and ultracold molecule community. We enter this new regime of ultracold chemistry by observing a resonant effect on ultracold reaction rates. By using an electric field to create level crossings between rotationally excited scattering states of KRb, we trigger resonant dipolar interactions that dramatically alter the molecular collisions. In the vicinity of these resonances, we observe an extreme tunability of ultracold reaction rates, with a few percent change in the electric field strength resulting in a three orders-of-magnitude change in the reactive rate. Consequently, we have engineered a shielding of the molecules from reactive losses, realizing a long-lived gas of ultracold molecules under large electric fields.

Magneto-optical traps use a combination of laser light and precise adjustments of the magnetic field to rapidly produce ultracold trapped atoms. Such traps were an essential part of the process of producing Bose-Einstein condensates and Fermi gases in their lowest quantum state from clouds of ultracold atoms.

Molecules offer exciting platforms for studies of quantum chemistry, strongly correlated quantum systems, quantum information processing, and precision tests of fundamental physics. Dense samples of ultracold molecules are desired to explore these platforms. A general approach for producing a diverse set of ultracold molecules is based on laser cooling. After earlier demonstrations of laser cooling and magneto-optical trapping of the polar molecule yttrium oxide, or YO, we now employ sub-Doppler cooling techniques to achieve some of the lowest temperatures (~4 microKelvin) for laser cooled molecules (CaF, SrF, and YO), along with the highest phase space density. 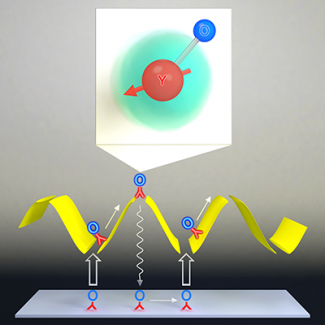 Sub-Doppler cooling of YO molecules.

Based on the unique energy level structure of YO molecules, we demonstrate that gray molasses cooling (GMC) is insensitive to a wide range of laser intensity, laser detuning, and magnetic field, resulting in a tunable and robust approach for cooling. Raman resonance can be combined with GMC to provide a clear picture of the cooling mechanism for the unique molecule structure. In addition, a novel scheme was invented to compress the molecular cloud by combining the spring force from a magneto-optic trap with the magnetic-insensitive GMC under continuous operation of a quadrupole magnetic field. This scheme creates a laser-cooled molecular cloud with the highest spatial density and phase space density, which has been loaded into a far-of-resonance optical dipole trap for further studies.