Intrinsic photophysics and structure of biochromophores 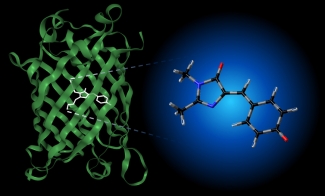 Chromophores that absorb visible or near-infrared light are ubiquitous in biology, with functions ranging from light harvesting for photosynthesis to photocatalysis to signaling in bacteriophytochromes. In biotechnology, fluorescent proteins have become a workhorse platform for fluorescence labeling, with the green fluorescent protein (GFP) and its variants being the most widely used for monitoring in vivo processes. Other strongly absorbing molecules are used in photodynamic therapy and as photosensitizers in cancer therapy.

The photophysical properties of such biochromophores depend on their chemical environment. For example, the chromophore unit responsible for the fluorescence in GFP (see image below) is not fluorescent in aqueous solution, and its absorption spectrum is significantly shifted from its position in the protein. Interestingly, the absorption spectrum of the GFP chromophore in vacuo is very similar to its spectrum in the protein, suggesting that experiments in vacuo can be used to probe the initial photophysics of GFP (see here and here for examples of our work on this molecule). We are characterizing the intrinsic photophysical and structural properties of biochromophores using cryogenic ion spectroscopy). This work is supported by the NSF through the JILA Physics Frontier Center.