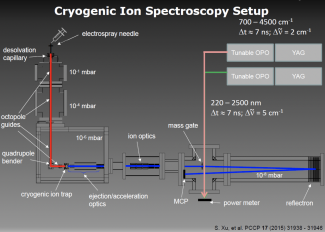 Schematic overview of our cryogenic ion spectroscopy setup. Click on image to see an animation.

We use electrospray ionization to bring ions from solutions into the gas phase. The ions enter the vacuum apparatus of the instrument through a desolvation capillary. They are then transferred through a series of octopole ion guides into a high vacuum chamber, where they are injected into a temperature controlled (T = 10 - 300 K) Paul trap. After entering the trap, the ions cool down in collisions with cold buffer gas, before being ejected into the acceleration region of a time-of-flight mass spectrometer. Here, the ions are mass-separated and then mass-selected using a pulsed mass gate. After mass selection, the ions are irradiated with light from a nanosecond-pulsed, tunable optical parametric converter system operating either in the near UV and visible range, or in the infrared. Fragment ions generated by photon absorption and subsequent photodissociation are analyzed in a second mass spectrometry step, using a reflectron. The fragment ion intensity is monitored as a function of the photon energy, yielding a photodissociation spectrum.