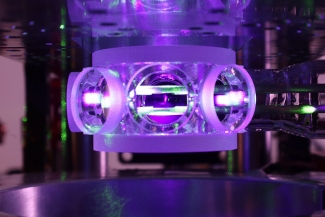 Unlike their bosonic counterpart, fermionic isotopes of alkaline-earth atoms benefit from having nuclear spin. This spin has been proposed for new many-body models, such as SU(N) physics, as well as the basis for new qubit architectures. In a new experiment, we seek to gain single-qubit-resolved control of arrays of Ytterbium-171 atoms, where quantum information is stored in the spin-1/2 nuclear spin of this isotope. We seek to engineer the resulting system to fully exploit the high two-qubit gate speeds possible with large Rydberg Rabi frequencies from the excited clock state. Beyond its use for metrology, we wish to leverage rapid control of the clock transition — a challenge in bosonic isotopes — to realize spatially-resolved control of Rydberg interactions as well as lossless single-qubit-resolved measurement. This suite of capabilities will be powerful for exploring QIP algorithms as well as many-body models for quantum simulation. Topics of particular interest to us are: 1) ultrafast two-qubit gates, 2) new many-body cooling methods, 3) implementation of promising NISQ-era algorithms, 4) multi-qubit gate protocols with local qubit measurement.

This work also dovetails with a collaboration with the Regal group, where we are developing a platform for using optical tweezer arrays in a cryogenic environment.