The Molecule that Makes Jellyfish Glow

The molecule HBDI is the “chromophore” that gives green fluorescent protein in jellyfish its glow. Together with Visiting Fellow Prof. Jan Verlet (Durham University, UK), graduate students Wyatt Zagorec-Marks and Madison Foreman from the Weber Group examined the photophysics of this molecule and found that the environment—down to a single water molecule—surrounding it can greatly influence its behavior. 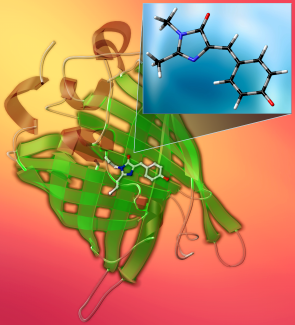 Green fluorescent protein—GFP—is a wonder of the natural world. This barrel-shaped protein makes jellyfish glow green under blue and ultraviolet light. Scientists can use this protein and its cousins that glow in different colors to track biochemical processes, opening new paths for research. Its discovery earned Osamu Shimomura, Martin Chalfie, and Roger Tsien the Nobel Prize for Chemistry in 2008.

At the heart of GFP is the chromophore HBDI—an ionic molecule that absorbs blue and UV light and emits that green glow. But you can’t just add HBDI to something and expect it to glow like it does in jellyfish. So, what exactly makes this molecule work? Under what circumstances will it glow—or not, and what happens after you first excite it?
That’s what JILA Fellow Mathias Weber and his research group want to know. In a series of experiments, the Weber Group at JILA has found that when it comes to what makes HBDI work, the details of the surroundings matter—down to the last molecule.

o understand how this molecule operates, think of all its atoms as being held together with springs, and electrostatic forces act like tethers connecting it to its surroundings. When light hits HBDI, the molecule absorbs a photon, bringing it into an excited electronic state. In this excited state, the molecule wants to change its shape. This is like plucking the imaginary springs between its atoms and they begin to vibrate—they expand, contract, and can even twist the molecule into new shapes. The properties of the electronic excited state are key to understanding how the molecule works, Weber explained.

“The signatures of these vibrations are important for understanding the photophysics, because they give us some clues as to what happens after excitation... maybe it will then fluoresce, or maybe not fluoresce and do something else,” he said.

As the molecule twists, its structure changes and it won’t fluoresce. That’s why the protein structure around it is important, as the interaction with the surrounding charges tether it in place, preventing the twisting. The protein plays a kind of tug-of-war with the HBDI molecule. Every time the molecule tries to twist, the protein pulls it back, allowing it to glow.

The Weber Group dug deeper to find out what's the lowest frequency of light, the lowest photon energy you need to excite this molecule, and how other molecules around it affect this energy.

Previously all the spectroscopy research on HBDI had been done either at room temperature, or in solution—both environments resulting in a broad, featureless spectrum. Weber’s team cooled the molecules to 50 Kelvin in an ion trap in vacuum, and studied the spectrum of this sample of cold, isolated molecules.

This experiment revealed new information about the energy in the motions that ultimately allow the molecule to twist.
“What we really learned in this was what exactly the vibrations are that lead it to deform initially,” Weber explained.
Scientists already knew that GFP’s structure helped protect HBDI from twisting. But in a solution in water without the protein, HBDI absorbs at quite different wavelengths. So, what happens when you add one water molecule at a time to HBDI? In another experiment, the Weber Group examined how an HBDI molecule with one or two water molecules and HBDI alone absorbed photons from the laser.

They still don’t know why the second water molecule changes the behavior of HBDI, while the first one doesn’t. Now the Weber Group is looking at the photophysics of other chromophores like biliverdin. Uncovering the photophysics details of these molecules will help other scientists working with HBDI and other chromophores to understand their behavior, and may allow them to tune the absorption and fluorescence wavelengths of such molecules to their specific applications.

“What we can do here is provide benchmark results for theorists who like to describe the photophysics of these systems,” Weber concluded. “This can actually help theorists to describe this molecule better, and to test their methods of describing this molecule. These calculations are difficult!”