Will joined the Kaufman Group after completing his undergraduate studies at Yale University, where he graduated as a physics major. Along the way, he pursued his interests in biophysics, complex mathematical systems, and scientific research that can make a positive difference in people’s lives by studying computational neuroscience with Assistant Professor of Psychiatry and Physics John Murray. In the Murray Lab, Will studied organizing principles for gene expression in human cortex, specifically genes thought to relate to brain function or neuropsychiatric diseases, such as schizophrenia. Will subsequently discovered in an advanced lab course that he enjoyed constructing tabletop AMO physics experiments, and began working with Assistant Professor of Physics Nir Navon on a project aimed at creating a potassium BEC. With Professor Navon, he learned the fundamentals of getting an AMO experiment up and running from just a clear optics table. Will is excited to be in the Kaufman Group, where he hopes to master the art and science of AMO experiment, and more generally learn as much new physics as possible. 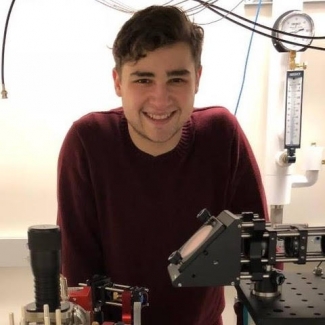