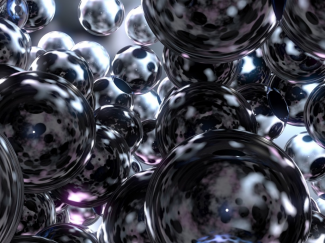 The first dilute gas Bose-Einstein condensate (BEC) was made at JILA in 1995. The gas BEC is a superfluid and is related to another superfluid liquid He. For years scientists have studied superfluid liquid He, trying to understand its properties, but the fact that this state of matter occurred in a strongly interacting liquid made this inherently difficult challenging from a theoretical perspective. One of the things that made the 1995 discovery so exciting was that we now have a much simpler system in which to understand Bose-Einstein condensation and superfluidity. Our BEC occurs in an ultracold gas with controllable densities and interaction strengths.

Our goal is to bridge the gap between these two superfluid systems and explore the field in which few-body meets many-body. In our experiments, we make Bose-Einstein condensates using bulk gases of Rb-85 and K-39, both species featured by magnetic-field tunable Fano-Feshbach resonances. By exploiting such resonance-enhanced scattering processes, we start from a weakly interacting BEC, then quench the magnetic field onto resonance to study the so-called unitary limit where the scattering length goes to infinity. In spite of the challenges from short BEC lifetime and out-of-equilibrium evolution, we have discovered very rich phenomena including universal dynamics, fractional scaling properties and production of Efimov trimers. Equipped with our second version of BEC machine, we are looking forward to a bigger world of species-dependent and state-dependent quantum many-body physics. 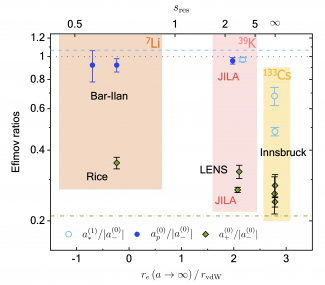 We study three-atom inelastic scattering in ultracold 39K near a Feshbach resonance of intermediate coupling strength. The non-universal character of such resonance leads to an abnormally large Efimov absolute length scale and a relatively small effective range re, allowing the features of the 39K Efimov spectrum to be better isolated from the short-range physics. Meticulous characterization of and correction for finite temperature effects ensure high accuracy on the measurements of these features at large-magnitude scattering lengths. For a single Feshbach resonance, we unambiguously locate four distinct features in the Efimov structure. Three of these features form ratios that obey the Efimov universal scaling to within 10%, while the fourth feature, occurring at a value of scattering length closest to re, instead deviates from the universal value.

We perform precise studies of two- and three-body interactions near an intermediate-strength Feshbach resonance in 39K at 33.5820(14) G. Precise measurement of dimer binding energies, spanning three orders of magnitude, enables the construction of a complete two-body coupled-channel model for determination of the scattering lengths with an unprecedented low uncertainty. Utilizing an accurate scattering length map, we measure the precise location of the Efimov ground state to test van der Waals universality. Precise control of the sample’s temperature and density ensures that systematic effects on the Efimov trimer state are well understood. We measure the ground Efimov resonance location to be at −14.08(17) times the van der Waals length rvdW, significantly deviating from the value −9.7 rvdW predicted by van der Waals universality. We find that a refined multi-channel three-body model, built on our measurement of two-body physics, can account for this difference and even successfully predict the Efimov inelasticity parameter η.

We convert a strongly interacting ultracold Bose gas into a mixture of atoms and molecules by sweeping the interactions from resonant to weak. By analyzing the decay dynamics of the molecular gas, we show that in addition to Feshbach dimers it contains Efimov trimers. Typically around 8% of the total atomic population is bound into trimers, identified by their density-independent lifetime of about 100μs. The lifetime of the Feshbach dimers shows a density dependence due to inelastic atom-dimer collisions, in agreement with theoretical calculations. We also vary the density of the gas across a factor of 250 and investigate the corresponding atom loss rate at the interaction resonance.

The microscopic structure of the first-discovered quantum fluid, superfluid liquid helium, is difficult to access owing to limited experimental probes. Although an ultracold atomic Bose gas with tunable interactions had been proposed as an alternative strongly interacting Bose system, experimental progress has been limited by its short lifetime. Here we present time-resolved measurements of the momentum distribution of a Bose-condensed gas that is suddenly jumped to unitarity. Contrary to expectation, we observe that the gas lives long enough to permit the momentum to evolve to a quasi-steady-state distribution, consistent with universality, while remaining degenerate.

A powerful set of universal relations, centered on a quantity called the contact, connects the strength of short-range two-body correlations to the thermodynamics of a many-body system with zero-range interactions. We report on measurements of the contact, using rf spectroscopy, for an 85Rb atomic Bose-Einstein condensate (BEC). For bosons, the fact that contact spectroscopy can be used to probe the gas on short time scales is useful given the decreasing stability of BECs with increasing interactions. A complication is the added possibility, for bosons, of three-body interactions. In investigating this issue, we have located an Efimov resonance for 85Rb atoms with loss measurements and thus determined the three-body interaction parameter. In our contact spectroscopy, in a region of observable beyond-mean- field effects, we find no measurable contribution from three-body physics. 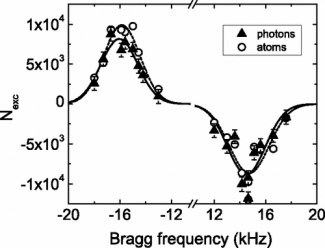 We demonstrate a photon-counting technique for detecting Bragg excitation of an ultracold gas of atoms. By measuring the response of the light field to the atoms, we derive a signal independent of traditional time-of-flight atom-imaging techniques. With heterodyne detection we achieve photon shot-noise limited detection of the amplification or depletion of one of the Bragg laser beams. Photon counting for Bragg spectroscopy will be useful for strongly interacting gases where atom-imaging detection fails. In addition, this technique provides the ability to resolve the evolution of excitations as a function of pulse duration. 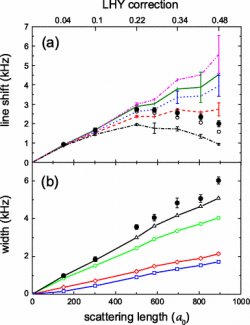