We report on the first measurement of a temperature dependence to the Casimir-Polder force. This measurement was obtained by positioning a nearly pure Rb87 Bose-Einstein condensate a few microns from a dielectric substrate and exciting its dipole oscillation. Changes in the collective oscillation frequency of the magnetically trapped atoms result from spatial variations in the surface-atom force. In our experiment the dielectric substrate is heated up to ~605K while the surrounding environment is kept near room temperature (~310K). The effect of the Casimir-Polder force is measured to be nearly three times larger for a ~605K substrate than for a room-temperature substrate, a conclusive temperature dependence in agreement with theory.

We have performed a measurement of the Casimir-Polder force using a magnetically trapped Rb87 Bose-Einstein condensate. By detecting perturbations of the frequency of center-of-mass oscillations of the condensate perpendicular to the surface, we are able to detect this force at a distance ~5 microm, significantly farther than has been previously achieved, and at a precision approaching that needed to detect the modification due to thermal radiation. Additionally, this technique provides a limit for the presence of non-Newtonian gravity forces in the ~1 microm range.

A magnetically trapped Rb87 Bose-Einstein condensate is used as a sensitive probe of short-range electrical forces. In particular, the electric polarization of, and the subsequent electric field generated by, Rb87 adsorbates on conducting and insulating surfaces is measured by characterizing perturbations to the magnetic trapping potential using high-Q condensate excitations. The nature of the alterations to the electrical properties of Rb adsorbates is studied on titanium (metal) and silicon (semiconductor) surfaces, which exhibit nearly identical properties, and on glass (insulator), which displays a smaller transitory electrical effect. The limits of this technique in detecting electrical fields and ramifications for measurements of short-range forces near surfaces are discussed. 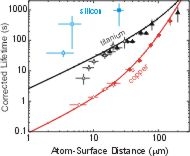 We have measured magnetic trap lifetimes of ultra-cold 87Rb atoms at distances of 5-1000 microm from surfaces of conducting metals with varying resistivity. Good agreement is found with a theoretical model for losses arising from near-field magnetic thermal noise, confirming the complications associated with holding trapped atoms close to conducting surfaces. A dielectric surface (silicon) was found in contrast to be so benign that we are able to evaporatively cool atoms to a Bose-Einstein condensate by using the surface to selectively adsorb higher energy atoms.

We have performed precision microwave spectroscopy on ultra-cold Rb-87 confined in a magnetic trap, both above and below the Bose-condensation transition. The cold collision shifts for both normal and condensed clouds were measured, which allowed the intra- and inter-state density correlations (characterized by sometimes controversial "factors of two") to be determined. Additionally, temporal coherence of the normal cloud was studied, and the importance of mean-field and velocity-changing collisions in preserving coherence is discussed.

We present the first spatially resolved images of spin waves in a gas. The complete longitudinal and transverse spin field as a function of time and space is reconstructed. Frequencies and damping rates for a standing-wave mode are extracted and compared with theory.

We observe counterintuitive spin segregation in an inhomogeneous sample of ultracold, noncondensed rubidium atoms in a magnetic trap. We use spatially selective microwave spectroscopy to verify a model that accounts for the differential forces on two internal spin states. In any simple understanding of the cloud dynamics, the forces are far too small to account for the dramatic transient spin polarizations observed.

We have devised a new, stronlgy simplified BEC apparatus creating large condensates of 87Rb. Atoms are first loaded into a MOT from background vapor.

Two quadrupole coils mounted on a mechanical translation state transport the atoms into a glass cell surrounded by two permanent magnets. The permanent magnets form a Ioffe-Pritchard type magnetic trap in which evaporative cooling is carried out.