We have demonstrated a BEC interferometer in a waveguide. A double pulse of a standing light wave splits the condensate into two packets of equal size. The two packets propagate in opposite directions down the axis of the waveguide. A single pulse then reverses the momentum of the two wave packets simultaneously. A second double pulse reads out the phase shift, and is applied when the wave packets overlap. We can apply a magnetic gradient across the waveguide to induce a phase shift. The coherence of condensates in the guide is observed up to 10 ms with maximum separation of 120 mm. 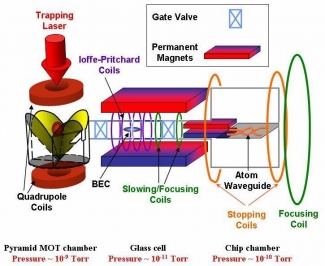 The experimental apparatus consists of three vacuum chambers, as shown in the schematic below: 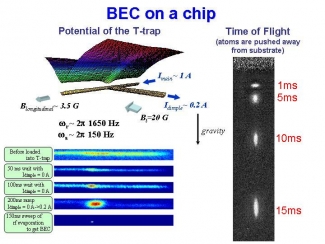 BEC on a chip

We begin with a cloud that has been cooled to a few microkelvins in the glass cell chamber. We then release confinement in the axial direction, allowing the atoms to travel towards the third chamber. While the atoms are traveling, we use several coils to apply fields which slow the atoms. The atoms are moving at about 10-20 cm/s as they are coupled into the magnetic guide on the chip. The guide is produced by the field from current running through microfabricated wires, added to a transverse bias field. During transfer, the cloud expands along the transfer/guide axis; it must be focused and collimated before evaporation towards BEC can begin again. To that end, we use a linear potential (produced by anti-Helmholtz coils that are wrapped around the chamber) to stop the cloud over the center of the chip. After the atoms reach the center of the chip and are slow enough, the current in a wire oriented perpendicular to the guiding wire is ramped up. This produces a dimple in the longitudinal bias field and creates tight axial confinement. 170,000 atoms are loaded into this magnetic T-trap, and after a short sweep of forced evaporation we get ~10,000 atoms in the condensate. The graphic below illustrates the process; note that the time of flight image shows a larger cloud of about 70,000 atoms.

Atom Michelson Interferometer on a Chip Using a Bose-Einstein Condensate

An atom Michelson interferometer is implemented on an “atom chip.” The chip uses lithographically patterned conductors and external magnetic fields to produce and guide a Bose-Einstein condensate. Splitting, reflecting, and recombining of condensate atoms are achieved by a standing-wave light field having a wave vector aligned along the atom waveguide. A differential phase shift between the two arms of the interferometer is introduced by either a magnetic-field gradient or with an initial condensate velocity. Interference contrast is still observable at 20% with atom propagation time of 10 ms.

A magnetic waveguide structure allows switching of neutral atoms between two guides. The switch consists of lithographically patterned current-carrying wires on a sapphire substrate. By selectively sending current through a particular set of wires, we select the desired output port of an incoming beam. We utilize two different magnetic-guiding schemes to adiabatically manipulate the atom trajectory.

A laser-cooled neutral-atom beam from a low-velocity intense source is split into two beams while it is guided by a magnetic-field potential. We generate our multimode beam-splitter potential with two current-carrying wires upon a glass substrate combined with an external transverse bias field. The atoms are guided around curves and a beam-splitter region within a 10-cm guide length. We achieve a maximum integrated flux of 1.5 x 105 atoms / s with a current density of 5 x 104 amp/cm2 in the 100 mm -diameter wires. The initial beam can be split into two beams with a 50/50 splitting ratio.

Laser-cooled neutral atoms from a low-velocity atomic source are guided via a magnetic field generated between two parallel wires on a glass substrate. The atoms bend around three curves, each with a 15-cm radius of curvature, while traveling along a 10-cm-long track. A maximum flux of 2 x 106 atoms/sec is achieved with a current density of 3 x 104 A/cm2 in the 100 x 100- µm-cross-section wires. The kinetic energy of the guided atoms in one transverse dimension is measured to be 42 µK.