About the Lineberger Group

A Celebration of 40 Years of Ion Chemistry: by Carl Lineberger and his Co-Conspirators

June 13, 2009 - JILA and the Department of Chemistry and Biochemistry, University of Colorado

An Occurence at the Solvent Bridge 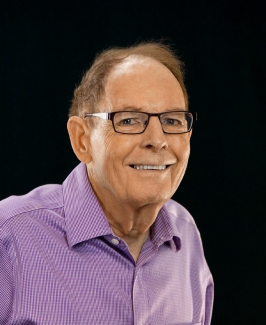 Professor Lineberger is interested in the structure and stability of ions and free radicals, photoelectron spectroscopy of anions, and photophysics and dynamics of cluster ions. The experimental methods all involve the interaction of laser radiation with mass-selected ion beams. Femtosecond tunable laser sources are employed to investigate molecular reaction dynamics in real time. Though they all work in concert, the experiments used by Professor Lineberger can be divided in three groups:

A first technique takes advantage of the fact that electron photodetachment form a negative ion can take place in a time short compared with nuclear motion, effectively freezing the photodetached neutral at the geometry of the anion. The evolution of this neutral can be followed by resonant ionization of the system. Systems recently studied in this fashion include ring closure of silver trimer, and solvent rearrangement in Cu(H2O)n.

A second method to probe negative ion structure is via photoelectron spectroscopy of negative ions. This approach also provides direct information on the structure and internal energy of the neutral species produced in the photodetachment process. Combining electron affinities with acidities measured by Professors Bierbaum and DePuy gives unique, direct information on the thermochemical properties of small, unstable compounds that are very difficult to otherwise study. The group can also study species that have only a fleeting existence, such as vinylidene, H2CC:. Systems of current interest include diradicals, a variety of carbenes, and transition metal clusters. Future projects include studies of adsorbates on transition metal clusters, nitrogen-rich heterocycles, and other simple radicals.

Another area of interest is the photophysics of both positive and negative cluster ions. Photofragmentation of clusters, e.g., (CO2)n+, (CO2)n- , I2-(CO2)n and Arn+, has been studied recently. The time-resolved photodissociation and recombination of clusters such as I2-(CO2)n, I2-(N2O)n andI2-(OCS)n are being pursued using femtosecond lasers. A new photoelectron imaging apparatus has been developed to assist in studies of strongly bound anions and to begin studies of ionic reactions with partial solvent shells.

In all of these studies, close collaborations with theoretical chemists are essential to extract the maximum understanding of the chemical processes.