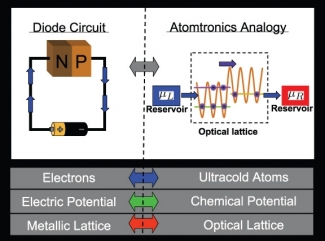 Atomtronics focuses on ultracold atom analogs of electronic circuits and devices. These systems aim to realize semiconductor and especially diode and transistor behavior in atomic systems. It is even possible to construct complete atomtronic circuits. Such circuits contain the analogue of electronic power supplies or batteries, and the necessary device connections. This opens up the possibility for more complex circuits in which atomtronic device components are cascaded. The approach we study develops a general theoretical method for solving the dynamics of strongly-interacting, many-body open quantum systems.

A diode is in essence a device which exhibits an assymetric response; applying a potential gradient one way leads to a large current, and the opposite way leads to virtually no current. The atomtronic diode is notable in that it does this without relying on an intrinsic irreversibility of the device itself (e.g. the spontaneous emission of a photon or phonon). The atomtronic transistor also shares this feature, and yet produces essential transistor behavior, including the control of a larger atomtronic current with a smaller one, the ability to perform digital logic, and linear amplification. One motivation for designing atomtronic diode and transistor components that are intrinsically reversible is that they can then be combined and cascaded in quantum computing applications where coherent logic is required.

This topic is relevant for the emerging field of strongly-correlated dynamical and nonequilibrium phenomena in ultracold atomic gases. Atomtronic devices require site-by-site control of the temporal or spatial properties of optical lattices, a common goal for numerous experiments aiming to utilize optical lattices for quantum control, quantum transport, quantum computing, and quantum simulation.  What is novel here is that the atomtronic systems are open quantum systems, meaning that they are composed of optical lattices coupled to two or three reservoirs, with the reservoirs acting as sources or sinks for particles.